Alighiero Boetti’s work is centered on his belief in the artist’s dual role as a “shaman/showman.”  In the early 1970s, he renamed himself as a dual persona “Alighiero and Boetti,” reflecting the opposing factors presented in his work—the individual and society, error and perfection, order and disorder.  Primarily associated with the group of conceptual artists based in Italy known as Arte Povera, the artist has used a broad range of media over the course of his career.  The exhibition and catalogue present work from the late 1960s until his death in 1994.  Includes essays by Paola Morsiani and Barry Schwabsky, an interview with the artist by Achille Bonito Oliva, selected texts by Alighiero Boetti, and documentation on the artist’s career.

When 1 is 2: The Art of Alighieri e Boetti is organized by Paola Morsiani, CAMH Curator. 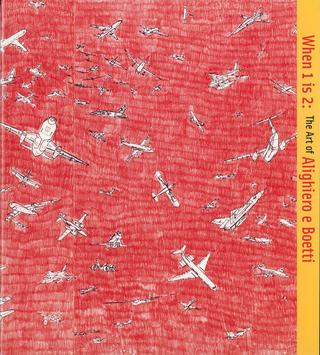