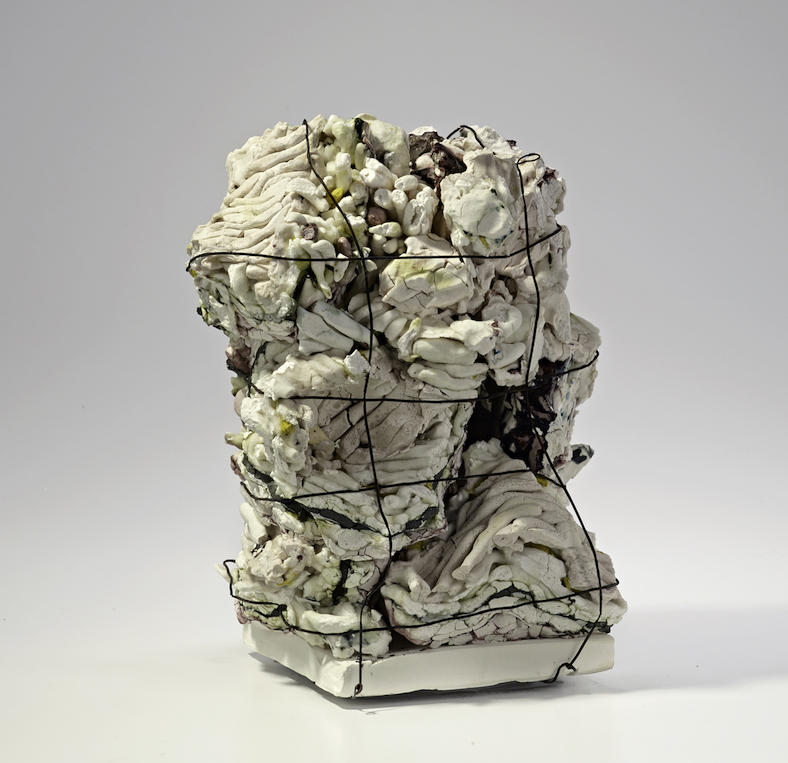 Annabeth Rosen: Fired, Broken, Gathered, Heaped is the artist’s first major survey and chronicles over 20 years of her work in ceramics. The exhibition features works on paper that mirror the trajectory of her works created in clay.

For over two decades, Annabeth Rosen has demonstrably delved into the place of craft in the contemporary art landscape. Formally trained in ceramics, Rosen has expanded her practice from the functional and decorative into expansive conceptual installations that meld materiality and process. Her diminutive and occasionally monumental works are composed through laborious and obsessive additive processes that push the medium beyond spectacle and into dialogues about endurance, labor, and feminist thought, as well as nature, destruction, and regeneration.

Rosen also sees the studio and the kiln as places of site and embraces process and chance as instrumental in the formation of her art objects. The artist rarely attempts to obscure her hand as a primary instrument and often “binds” multitudes of discrete works to create monumental objects. Twisting and shaping the clay, Rosen creates what has been described as organic forms—fragmented figurations of flowers, tubers, leaves, and root-like structures that are skillfully fired together and then arranged in large grids or as standalone works. Rosen has said of her work, “I break almost as much ceramics as I make, and I think I learn as much about the work by doing so. By being so focused on a destination for the piece, I overlook shapes and ideas. Much of the work is made with already fired parts broken, reassembled, re-glazed, and re-fired with the addition of wet clay elements if necessary. I work with a hammer and chisel, and I think of the fired pieces as being as fluid and malleable as wet clay.”

Annabeth Rosen is a pioneer in the field of contemporary ceramics, bringing fluidity to the genre and its discourse with contemporary art.  Within the genre’s trajectory, the artist functions as an important link between such artist as Lynda Benglis, Mary Heilmann, Jun Kaneko, Peter Voulkos, as well as a new generation of artists working in the medium.

Annabeth Rosen: Fired, Broken, Gathered, Heaped is generously supported by Sara and Bill Morgan. This exhibition is also made possible in part by grants from the National Endowment for the Arts and The Andy Warhol Foundation for the Visual Arts.

Support for CAMH is generously provided by the Museum’s Board of Trustees and their families:

United is the Official Airline of the Contemporary Arts Museum Houston.