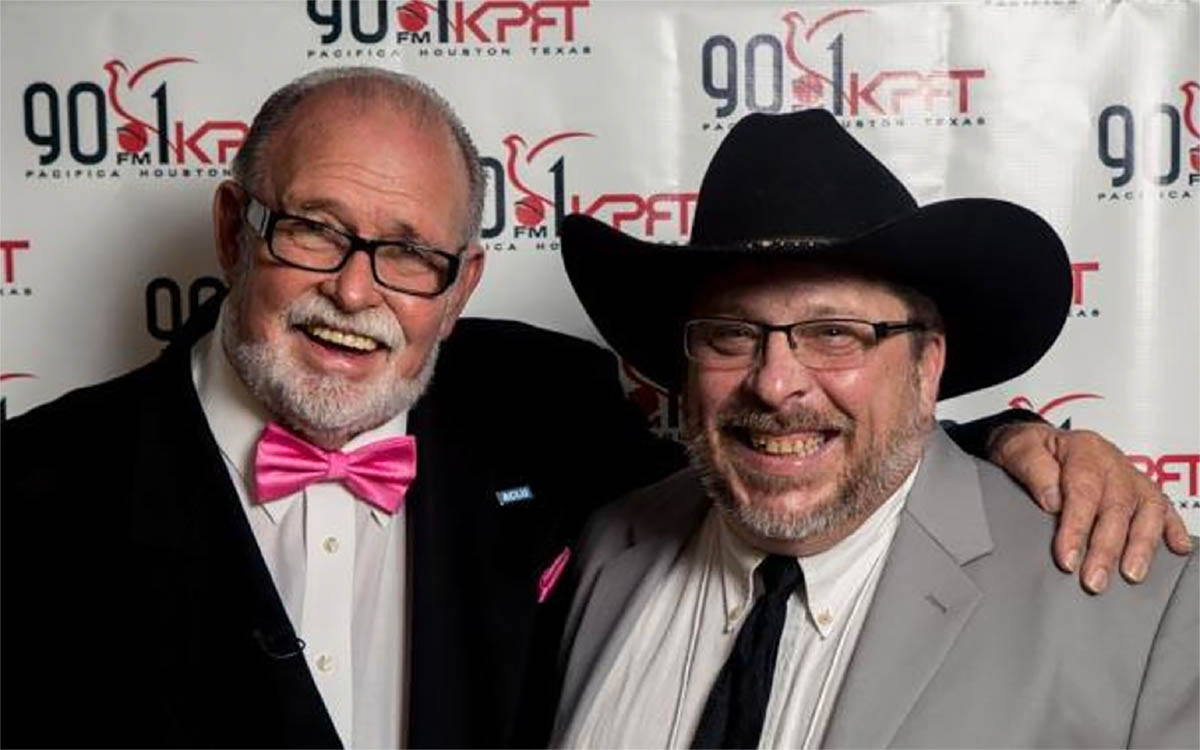 Join Ray Hill and David Collingsworth of KPFT’s The Prison Show for an overview of the show’s history, mission, and objective. Also learn about how their work connects to the exhibition Walls Turned Sideways: Artists Confront the Justice System. Light lunch provided.

About The Prison Show

The Prison Show broadcasts from 90.1 FM KPFT in Houston, Texas, a nonprofit Pacifica Network radio station based in the Montrose neighborhood. The first hour of the program offers news and talk about Texas prisons and courts, and the second hour is when relatives of prisoners can call in live and deliver messages to their loved ones who are incarcerated. The Prison Show is a live radio program airing Fridays from 9–11PM, streaming at www.kpft.org, www.theprisonshow.net. They are also live on https://www.facebook.com/kpfttheprisonshow. The Prison Show team is made up of David, Hank, DeeDee, Tanika, Daniel, Tom, Mike, Dani, Joseph, Ms. Linda, and Dave Atwood. David Collingsworth is the Producer, the Chief Engineer is Mike Lewis, and the Hosts are Hank Lamb and Ms. Tanika Solomon. Ex-con and gay activist Ray Hill founded The Prison Show in 1980, Hill produced and hosted the show for three decades and remains involved as a trusted advisor today. Lobbying by The Prison Show was instrumental in persuading the Texas Legislature to approve the installation of prison payphones for convicts in 2007. Texas was the last state to do so. The Prison Show team is a motley crew of ex-offenders, teachers, professors, lawyers, chaplains, activists, ex-politicos, male and female who see the error in the current prison system and the worth in The American people lost but not forgotten inside. The Prison Show has connected Texas prison inmates with their loved-ones and friends on the outside who cannot easily call or visit. The Prison Show has through their staff brought together Texas Inmate Families Association, End Mass Incarceration, Texas Coalition To Abolish The Death Penalty, Pacifica Radio, and many more local businesses, churches, and organizations whose target audience are the offenders inside the walls of our prison system.

While in TDCJ, Collingsworth earned his GED in 1990, a technical diploma for HVAC and Refrigeration in 1991, and a BA in Pastoral Counseling in 1996. In 1996 Mr. Collingsworth was paroled to Calvary Commission in Lindale, Texas. and became a student at the Life Skills Institute (LSI) and International College of Missions (ICOM) where he completed 14 months of missionary training under the direction of Joe and Charlotte Fauss.

After spending time in the Coffield, Gib Lewis, Torres, and the Byrd units he asked to be placed into a Therapeutic Community in the Kyle Unit before being released to the Melton Center in Beaumont, Texas in 2010. Collingsworth moved to Spirit Key Inc. 2011, a transitional work center, where Collingsworth served under Director Allen Rice as a house manager, property manager, and chaplain for three years.

Collingsworth is currently a productive member of society with full time employment as a Facility Maintenance Manager for Planet Fitness in Houston, Texas. He is also very active in the community as a criminal justice advocate. In 2004 Collingsworth began volunteering at The Prison Show 90.1 FM KPFT with Ray Hill and he became the Producer of the show in May 2013.  Collingsworth shares his 28 years of knowledge and experience with TDCJ-ID and the Texas Pardon and Parole Division to help others navigate the difficult road of criminal justice in Texas.

Ray Hill is a 77-year-old native Houstonian. He graduated from Galena Park public schools and attended Stephen F. Austin State University, the University of Houston, and Tulane University. He came out as a gay man to his family and at Galena Park High School in 1958.

Hill served as the original producer and host of the Wilde N Stein radio program, one of the first regularly scheduled gay and lesbian radio shows in the country. He was also the original producer and host of The Prison Show, also on KPFT-FM. As a writer and performer, Hill has been featured in the theatrical productions Ray Hill, The Prison Years, Ray Hill and the Sex Police, Ray Hill in Love, Outlaw, Queer Like Ray Hill, and A Stroll through Houston Gay History with Ray Hill.