Benjamin Patterson: Born in the State of FLUX/us is a retrospective of the artist’s career, which now spans nearly fifty years. The exhibition includes both early and recent work by the artist that range from annotated scores and books to painting and sculpture. Video documentation from performances and audio files of Patterson’s music will also be featured. As a founding member of Fluxus, a loose and international collective of artists who infused avant-garde practices of the day with humor and anarchic energy, Patterson helped revolutionize the artistic landscape at the advent of the 1960s and usher in an era of new and experimental music. Now in his seventies, Patterson is being discovered by a new generation of artists. Benjamin Patterson: Born in the State of FLUX/us marks the artist’s first major exhibition, bringing together a multitude of works never before seen in the United States. The exhibition is curated by CAMH Senior Curator Valerie Cassel Oliver.

Trained in classical music instrumentation and composition, Patterson made his most significant contribution to Fluxus with his concept of the “action as composition”—the resulting sound from simple and complex actions. This “spectacle of music” is rooted within the precepts of Dada, a movement that aimed at reinventing art in the midst of the cultural apocalypse of World War I. As with Dada, Fluxus saw the body as material, hence the group’s strong emphasis on the practice of performance. Of all the Fluxus artists, it is Patterson who explores the connection between action and music, creating compositions for both the body in action and unconventional playing of his instrument, the contra bass, through ordinary gestures and other actions.

Like many artists who became affiliated with Fluxus, Patterson was trained in traditional classical music, but soon turned to experiments in new music composition. After a brief encounter with John Cage in 1960, Patterson soon became a fixture in the experimental music scene in Germany. In 1961, he coorganized the first International Festival of New Music with George Macuinas. The event which debuted at the Staatsmuseum in Wiesbaden, Germany, later became known as the first official Fluxus event. Patterson is one of the few surviving members of that constellation of artists whose works were featured at the festival, including John Cage, Philip Corner, Dick Higgins, Alison Knowles, George Macuinas, Nam June Paik, David Tudor, Emmett Williams, among others.

Iconic works by Patterson, including Paper Piece (1960), Variations on Double Bass (1961), and later Lick Piece(1964), have all become staples in the Fluxus performance handbook. For the first time, his annotated scores and instructions for performances will be on exhibit. Accompanying these scores is audio and video documentation of the artist’s performances over the last five decades. In addition to scores and performance documentation, Born in the State of FLUX/us will feature a series of unique artist books, puzzle poems, paintings, sculptures, and installation works created by Patterson. More than a hundred works—works that are often provocative, with a tongue-in-cheek humor—are featured in the exhibition along with ephemera from Patterson’s “ordinary life.” For twenty years, Patterson withdrew from his career as an artist to embrace an “ordinary life.” During this period, Patterson was employed as a reference librarian, became an arts administrator, and entrepreneur, launching his own music management company, Ben Patterson Ltd.

After a nearly twenty-year hiatus, Patterson reemerged in the 1980s to resume his prolific career as an artist. In 1989, Patterson returned to Europe to live, creating a vast repository of scores, paintings, and sculptures that have been assembled in the United States for the first time with this exhibition.

Benjamin Patterson: Born in the State of FLUX/us underscores the significant contributions of this artist, whose presence within the dynamic constellation of Fluxus is palpable. The exhibition provides audiences with their first comprehensive look at Patterson’s work and explores his contributions to both Fluxus and the larger contemporary art landscape. 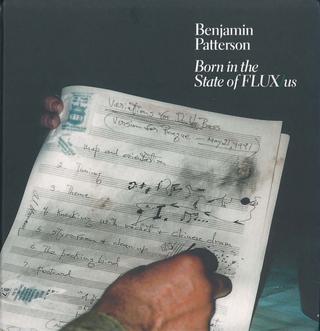