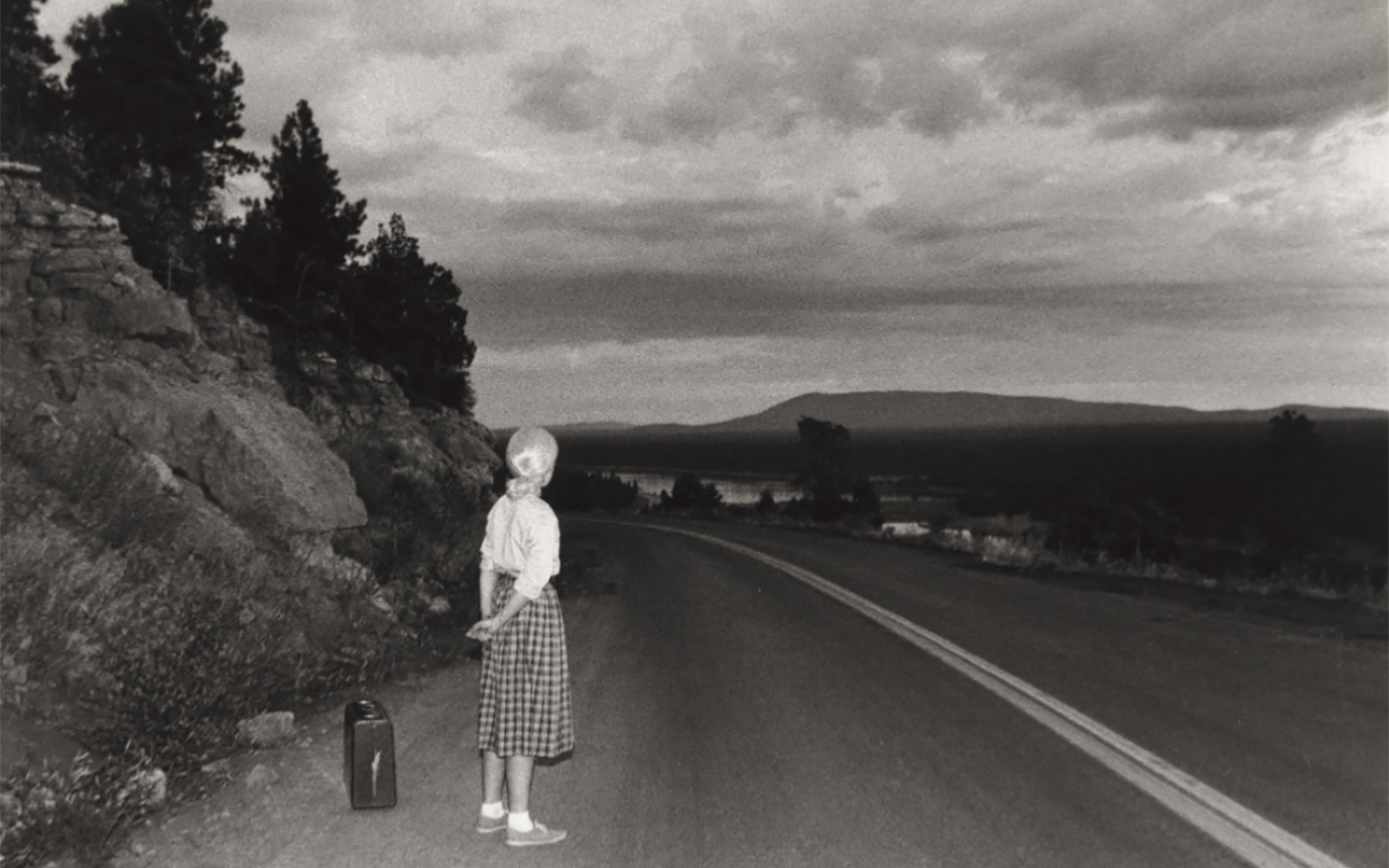 Cindy Sherman’s work deals exclusively with self-portraiture. Her large scale black and white photographs tend to be made in groups–inspired by a place or specific setting. Sherman’s work bypasses a good deal of discussion about what photography is or should be about. She takes her own photographs and has them commercially enlarged; she does not crop or color her prints. The scale of Sherman’s works recalls movie posters in size. In quality, they resemble promotional pictures given out in press packets for advertising of grade B movies.

Derived from movie stills, her photographs imply narrative sequences which are never completed. In almost all of her work she is seen alone in the setting. Always the environment can be recognized. It is in the West, at the pool, in the kitchen and is revealed to the viewer by the most clichéd clues. In each, Sherman places herself in evocative and mysterious circumstances and settings. What concerns us most is our own position in relationship to the scene and the figure in the photographs. Are we passersby or voyeurs? Sherman’s photographs invite psychological interpretations and set off an imaginative process. Our first responses are not made directly to the formal aspects of her work but rather are directed towards the meanings of her images. These images are at once stereo typical and generalized and yet also specified by Sherman’s use of herself rather than an anonymous model. Sherman’s images provoke associative thinking and encourage speculation about place and role.

On recent trips to California and Arizona, Sherman made sets of pictures of herself in a swimming pool, in front of a ranch style house, and in the different guises of a ranch owner’s wife, an Indian peasant woman, a hitchhiker, etc. Sherman’s characters seem at first to be as one-dimensional as paper dolls, however, once the viewer realizes that the artist is the character, the situation becomes more complex. By not using models, Sherman connects us directly to her personal fantasies. We are presented with scenes that have traditional associations and we are surprised by Sherman’s appearance in these contexts.

Essentially the use of self-portraiture opens questions of autobiography. Her figure, which is seen stopped on the street or beside a pier, leaning in a doorway, sitting on a bench or a windowsill, tells us about Sherman and her feelings about her place as well as her role. In her photographs she, perhaps, comes from an assignation with a lover, leaves a seedy abortion mill, and rests from a desert walk. We are not confused about her surroundings they are trite, clichéd and easily knowable. Rather we become observers as Sherman progresses through her day as housewife, hooker, clown. lover, bathing beauty and artist She is tired, bored, angry, wary and sad. Through her gestures and costumes, Sherman translates her feelings about how we should all feel about ourselves and our situations. Her photographs are receptacles for a strongly felt and rather mysteriously vague sense of person and place.