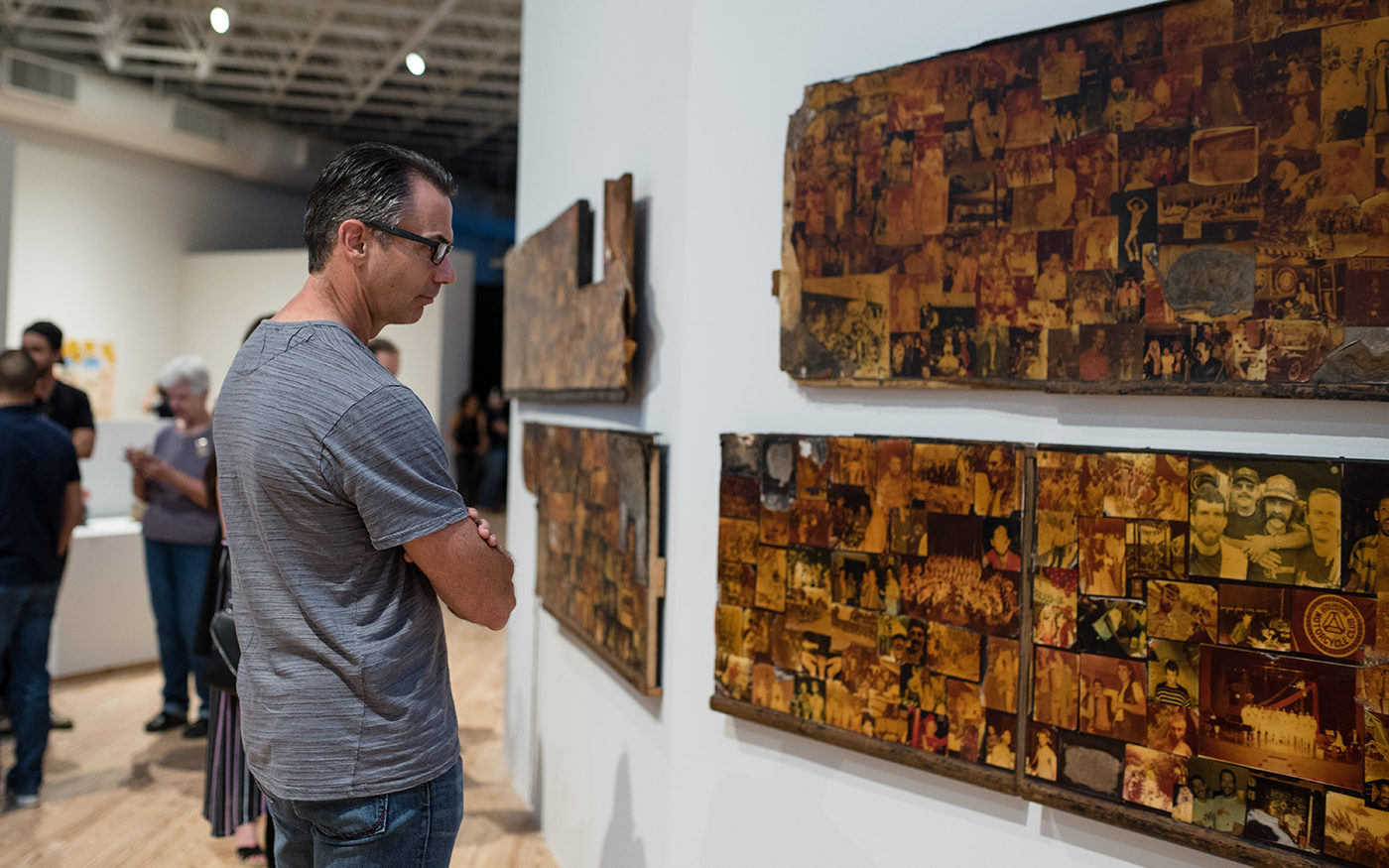 Mary’s…Naturally! was a gay bar formerly located at Westheimer and Waugh Drive in Houston, Texas. Operating in the Montrose neighborhood since 1968, Mary’s was an anchor for the local gay community. Currently on view in the exhibition Stonewall 50 are sections of the bar top featuring photographs encased under plastic resin to memorialize patrons who had died during in the early years of the AIDS epidemic.

This program is hosted in partnership with Judy Reeves and the Gulf Coast Archive & Museum (GCAM), and is presented with American Sign Language (ASL) interpretation.

About Marc Cohen
Marc Cohen is a 5th generation Houstonian who—for the past 35 years—has called Houston, Texas’s Montrose neighborhood home. He has been active in numerous charitable organizations that focus on the needs of queer communities and people impacted by HIV.  Cohen has had a diverse professional career, spending the first twenty-four years of his career in the for-profit sector managing retail stores before moving into the nonprofit world. For the past twenty-five years Cohen has devoted his career to working with an underserved population with a focus on chronic disease. His greatest accomplishments to date have been the expansion of a recreational and therapeutic camp for children with chronic disease as well as collaborating with Baylor College of Medicine (Houston, Texas) to implement programs in several sub-Saharan African countries. Currently, Cohen is on staff at Jewish Family Service as a case manager where he works with clients in trauma due to a disaster as well as those with neurological differences.

About Dalton DeHart
Dalton DeHart spent the first eighteen years of his life in the small East Texas community of Buna. He holds a BS and MA from Sam Houston State University in Huntsville, Texas, and a PhD from Nova Southeastern University in Ft. Lauderdale, Florida. During his undergraduate years at Sam Houston State University in Huntsville, Texas, he engaged in a number of academic and social activities, and began documenting his experiences, a practice that has continued to this day.

In 1980, DeHart returned to Texas to begin teaching at San Jacinto College Central in Pasadena, Texas, and in 1989 he became Chairman of the Language Skills Department, a position he retained until retiring from full-time teaching in 2006.  During that year, he received the highest honor that a professor can receive in the state of Texas. He was one of 15 professors selected from over 10,000 college and university applicants to receive the prestigious Minnie Stevens Piper Distinguished Professor Award. Most known in the Houston area for his photography, DeHart began this artistic pursuit in the late-1980s. Visually documenting everything from sporting events to community events, including political functions for the last five mayors of Houston and numerous city council members. To properly archive and make the photos more accessible to the community, DeHart launched his foundation website, daltondehart.com in late May 2004. Since then he has posted over 500,000 photographs covering more than 5,000 events.

About Brian Keever
Brian Keever relocated from Charlotte, North Carolina to Houston, Texas in 1981 to be closer to  friends and a to fulfill a desire to experience a more active gay community. He took a position with Blanton’s Florist which was located in Houston’s Montrose neighborhood, then at Hannah Niday Florist for a few years. In the late 1980s Keever had a career change when he went to work at This Week in Texas (TWT) Magazine holding a variety of positions for over a decade. Through this work, Keever began to interface more directly with the community—from the bar scene to local politics. Keever found a great interest in local politics and became active with the Gay Political Caucus in shaping gay activism within the city working alongside Bruce Cook, David Fowler, Ray Hill, Sue Lovell, and Annise Parker. Keever has been active with many non-profit organizations, but his fondest accomplishments were his work with The Names Project AIDS Memorial Quilt—assisting with the first city-wide exhibit at the George R. Brown Convention Center (Houston, Texas) during the quilts first national tour outside of San Francisco, California in 1987; as well as making quilt panels in local bars, Mary’s…Naturally! being the first of many in the “outback.” Keever is currently employed at Legacy Community Health.

About Judy Reeves
Judy Reeves (née Voulgaris) is a founder of the Gulf Coast Archive & Museum of GLBT History, Inc. She is “curator for life” by acclamation of the membership many years ago and enjoys that privilege. Reeves has held board positions in a variety of GLBT organizations including the Houston Gay & Lesbian Political Caucus, Gay & Lesbian Switchboard, March on Austin, Houston NAMES Project, Imperial Court of Houston, Houston Colt 45’s, and