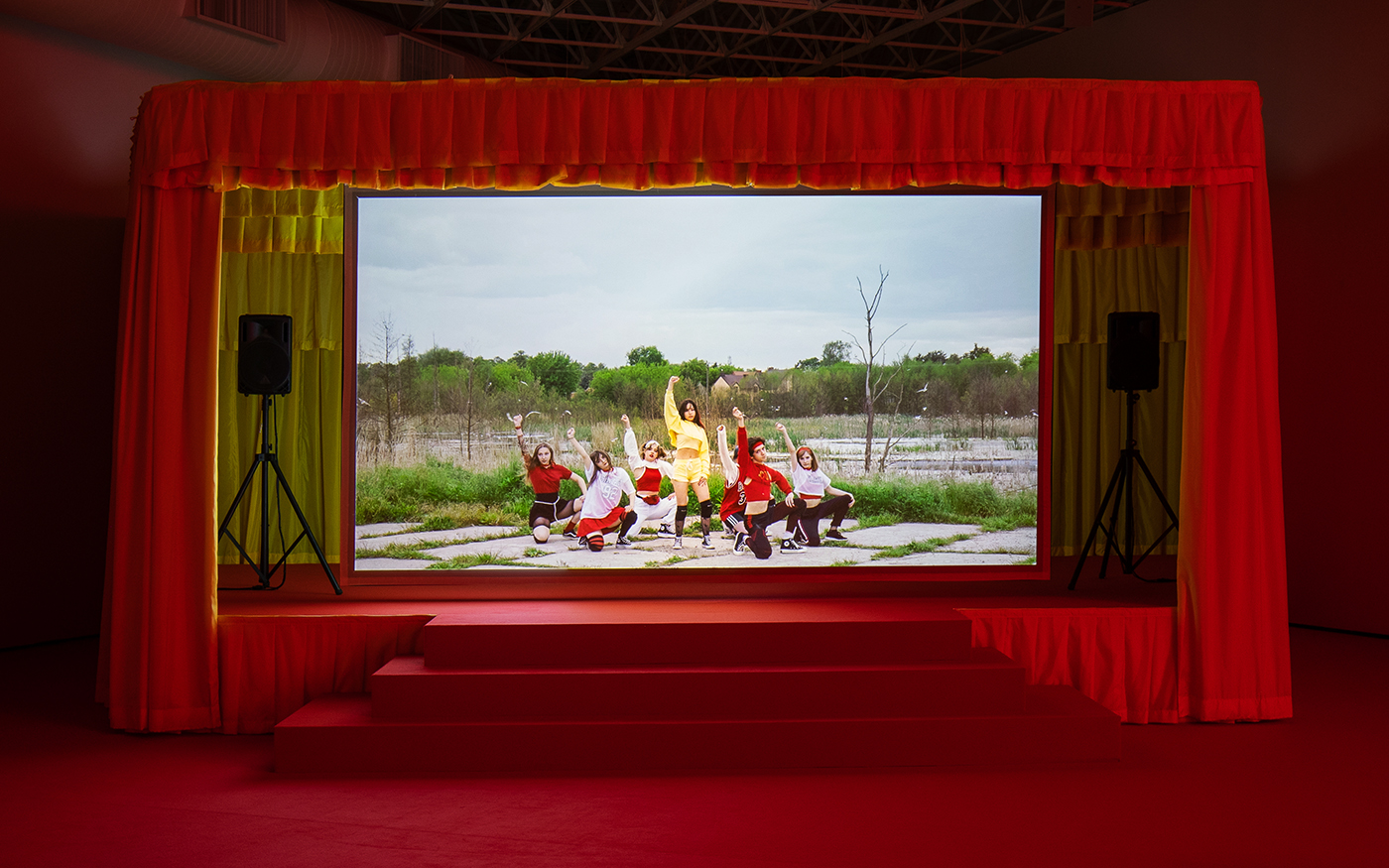 Diane Severin Nguyen: IF REVOLUTION IS A SICKNESS is the first solo museum exhibition of New York and Los Angeles-based artist Diane Severin Nguyen. The exhibition features a recent video installation, photographs, a site-specific architectural intervention, and the artist’s first public art commission in the form a billboard located in Houston’s Midtown neighborhood during the month of January 2023.

The exhibition is built around the titular video, IF REVOLUTION IS A SICKNESS, which is set in Warsaw, Poland and loosely follows the character of an orphaned Vietnamese child who grows up to be absorbed into a South Korean pop-inspired dance group. Widely popular within a Polish youth subculture, K-pop is used by the artist as a vernacular material to trace a relationship between Eastern Europe and Asia with roots in Cold War allegiances. Nguyen’s work reckons with the process of finding shared symbols and naming oneself from within another’s regime, while also positioning youth culture as a critical and crucial site of revolutionary power.

From January 2–29, 2023, Nguyen’s Not in this life (2023) will be displayed on a commercial billboard along U.S. Route 59. Presented in coordination with the artist’s exhibition at CAMH, the work is inspired by the fraught history of shrimping in Galveston Bay in the late 1970s and early 1980s, specifically in the form of violent clashes between Vietnamese immigrants and white fisherman aided by local militias and the Klu Klux Klan. Fears of scarcity, combined with rampant racism and xenophobia following the United States’ failed war in Vietnam, served to stoke tensions between economically disenfranchised communities.

Nguyen’s billboard, commissioned by CAMH, draws upon this history and the polarized political climate in which we find ourselves. Employing a popular romantic Vietnamese phrase, “hẹn kiếp sau,” which loosely translates to “we will meet in the next fate,” Nguyen’s work is equally mournful, hopeful, and humorous. With Not in this life, as with the artist’s enigmatic images and videos more generally, Nguyen explores visual culture’s central role in the construction of both self-identity and historical knowledge in relation to transnational diasporic Asian identity.

CAMH’s presentation of Diane Severin Nguyen: IF REVOLUTION IS A SICKNESS is supported in part by J. Patrick Collins.

Diane Severin Nguyen: IF REVOLUTION WAS A SICKNESS has been made possible by the patrons, benefactors and donors to CAMH’s Major Exhibition Fund: Chinhui Juhn and Eddie Allen, Sissy and Denny Kempner, MD Anderson Foundation, Rea Charitable Trust, Louisa Stude Sarofim, The Sarofim Foundation, and the Texas Commission on the Arts.

Diane Severin Nguyen’s first public art commission, which takes place in conjunction with the exhibition, is funded in part by the City of Houston via the Houston Arts Alliance.

Contemporary Arts Museum Houston is funded in part by the City of Houston through the Houston Arts Alliance.

Arts and Culture Texas Magazine is the exclusive media sponsor of CAMH’s presentation of Diane Severin Nguyen: IF REVOLUTION IS A SICKNESS.

Diane Severin Nguyen: IF REVOLUTION IS A SICKNESS is co-organized by Myriam Ben Salah, Executive Director and Chief Curator, the Renaissance Society at the University of Chicago; and Sohrab Mohebbi, Director, SculptureCenter, New York. The exhibition’s presentation at Contemporary Arts Museum Houston is organized by Rebecca Matalon, Senior Curator.

Diane Severin Nguyen: IF REVOLUTION IS A SICKNESS