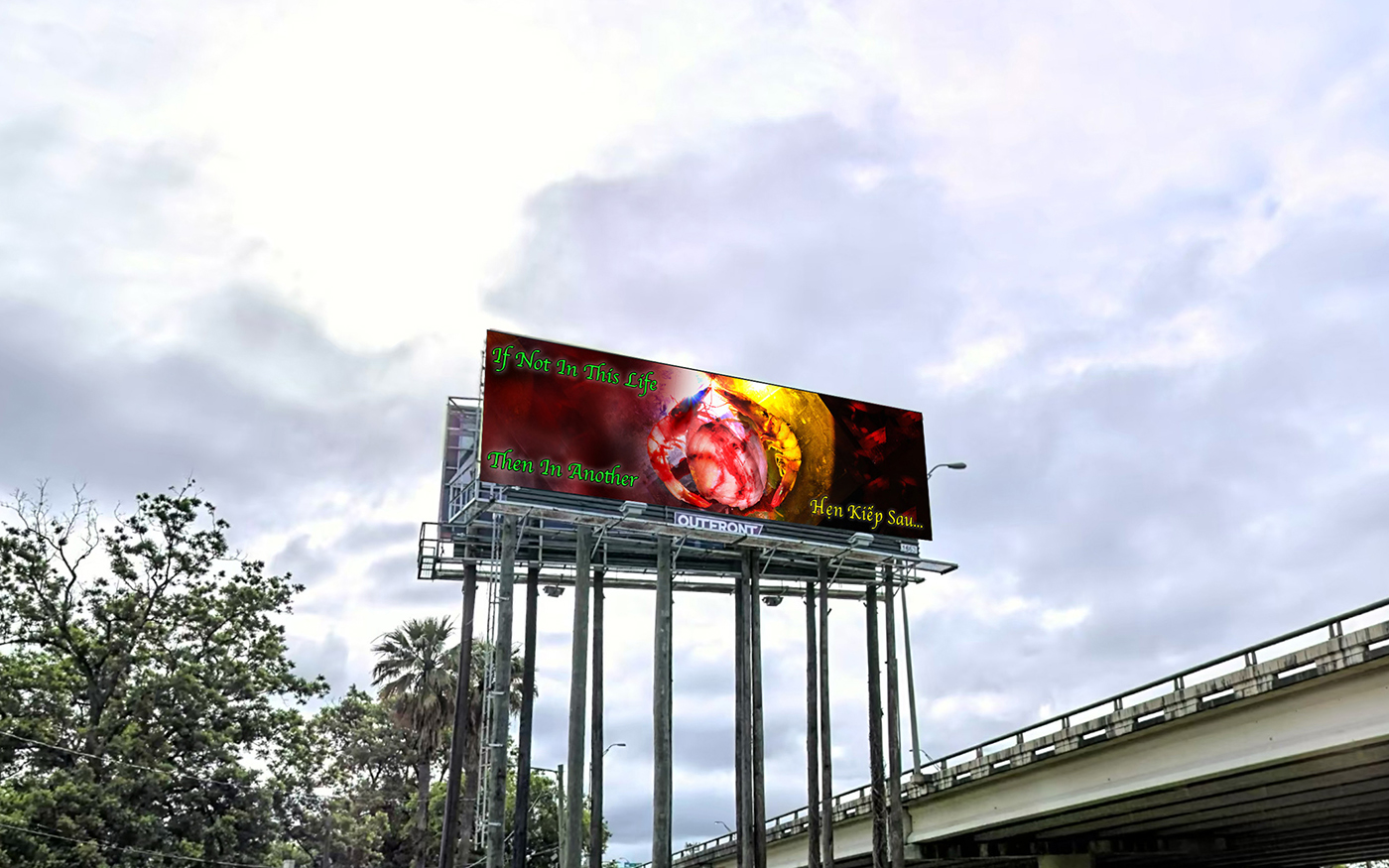 Presented in coordination with the exhibition, Diane Severin Nguyen: IF REVOLUTION IS A SICKNESS, the work is displayed on a commercial billboard off of U.S. Route 59 from January 2–29, 2023. The billboard is visible from the overpass after the onramp entrance at San Jacinto and from street view at the intersection of Caroline Street and Barbee Street.

Not in this life is inspired by Nguyen’s exploration of the fraught history of shrimping in Galveston Bay in the late 1970s and early 1980s. Following the Vietnam War, Vietnamese immigrants arrived in Houston and its surrounding areas seeking refuge and sustained employment. The similar climate and the immigrants’ existing experience and knowledge of fishing made Texas’s Gulf Coast an appealing destination. However, Vietnamese shrimpers were met with intense racism and threats of violence from white fishermen who allied themselves with local militias and the Klu Klux Klan. Seeking to rid the bays of new immigrants, white fishermen burned Vietnamese-owned boats and engaged in various tactics of extreme intimidation. At the time, Galveston Bay’s shrimping industry was already in decline due to pollution, newly built petrochemical plants along the coast, and hurricanes. Fears of scarcity, combined with rampant racism and xenophobia following the United States’ failed war in Vietnam, served to stoke tensions between economically disenfranchised communities.

Nguyen’s billboard draws upon this history and the polarized political climate in which we find ourselves. Employing a popular romantic Vietnamese phrase, “hẹn kiếp sau,” which loosely translates to “we will meet in the next fate,” Nguyen’s work is equally mournful, hopeful, and comical in its pairing of image and text, which suggest two shrimps as those fated for love on another astral plane. With Not in this life, as with the artist’s enigmatic images and videos more generally, Nguyen explores visual culture’s central role in the construction of both self-identity and historical knowledge in relation to transnational diasporic Asian identity.

CAMH’s presentation of Diane Severin Nguyen: IF REVOLUTION IS A SICKNESS is supported in part by J. Patrick Collins.

Diane Severin Nguyen: IF REVOLUTION WAS A SICKNESS has been made possible by the patrons, benefactors and donors to CAMH’s Major Exhibition Fund: Chinhui Juhn and Eddie Allen, Sissy and Denny Kempner, MD Anderson Foundation, Rea Charitable Trust, Louisa Stude Sarofim, The Sarofim Foundation, and the Texas Commission on the Arts.

Diane Severin Nguyen’s first public art commission, which takes place in conjunction with the exhibition, is funded in part by the City of Houston via the Houston Arts Alliance.

Contemporary Arts Museum Houston is funded in part by the City of Houston through the Houston Arts Alliance.

Arts and Culture Texas Magazine is the exclusive media sponsor of CAMH’s presentation of Diane Severin Nguyen: IF REVOLUTION IS A SICKNESS.

Diane Severin Nguyen: IF REVOLUTION IS A SICKNESS is co-organized by Myriam Ben Salah, Executive Director and Chief Curator, the Renaissance Society at the University of Chicago; and Sohrab Mohebbi, Director, SculptureCenter, New York. The exhibition’s presentation at Contemporary Arts Museum Houston is organized by Rebecca Matalon, Senior Curator.

Diane Severin Nguyen: IF REVOLUTION IS A SICKNESS