Marcel Duchamp’s readymades are an unmistakably radical gesture in the history of modern art. First produced in 1913, the readymades were, for the artist, “a form of denying the possibility of defining art.” Today, the readymade—as both an object and as an idea—has been so integrated into artistic strategy and discourse that the idea is a readymade itself. It is what it is. Or is it? attempts to recuperate a sense of the radicality of Duchamp’s gesture and to update dialogues around the notion of the readymade, thinking of them less as static objects than as active processes of articulating thought.  Artists today use the simple materiality and economy of means conveyed by the form to address a diversity of social, political, aesthetic, and temporal issues. It is what it is. Or is it? is organized by Dean Daderko, Curator at CAMH, and marks his curatorial debut at the Museum.

It Is What It Is. Or Is It? is made possible by generous support from the Union Pacific Foundation.

Funding for the Museum’s operations through the Fund for the Future is made possible by generous grants from Chinhui Juhn and Eddie Allen, Anonymous, Jo and Jim Furr, Barbara and Michael Gamson, Brenda and William Goldberg, Mr. and Mrs. I.H. Kempner III, Leticia Loya and Fayez Sarofim.

The Museum’s operations and programs are made possible through the generosity of the Museum’s trustees, patrons, members and donors. The Contemporary Arts Museum Houston receives partial operating support from the Houston Endowment, the City of Houston through the Houston Museum District Association, the National Endowment for the Arts, the Texas Commission on the Arts, and The Wortham Foundation, Inc. CAMH also thanks its artist benefactors for their support including Anonymous, Leonardo Drew, Tim Gardner, Oliver Herring, Jim Hodges, Michael Joo, Kurt Kauper, Jon Kessler, Terence Koh, Marilyn Minter, Ernest Neto and Roxy Paine.

It is what it is. Or is it? is curated by Dean Daderko, CAMH Curator. 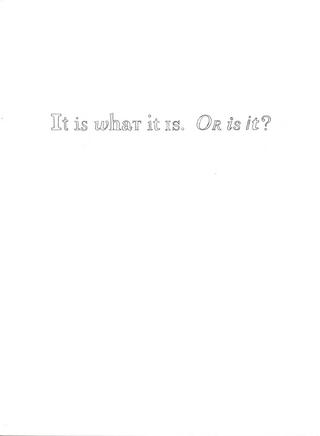