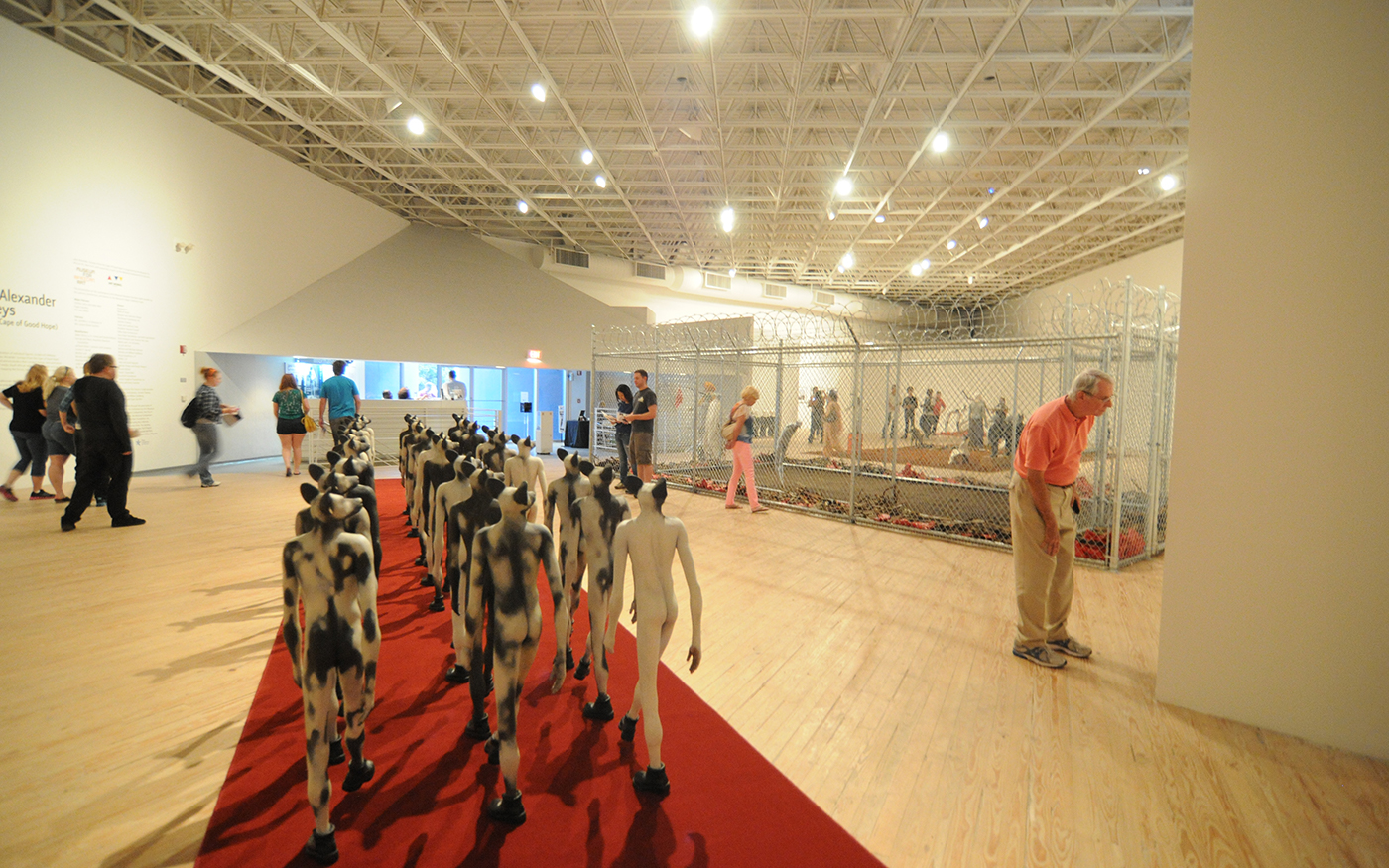 Jane Alexander’s hybrid mutants speak to the porous borders between humans and other forms of animal life. Alexander acts as a surveyor mapping the forces, interests, and passions at play in human behavior. Her sculptures, installations, and photomontages are firmly rooted in her South African experience. They also transcend their locality, revealing the disparity felt every day around the world between the rhetoric of peace and decorum and the human capacity for oppression and violence. Alexander’s body of work throws into relief the asymmetric relations and practices that preclude access for so many people to a free and dignified existence.

Jane Alexander, born in Johannesburg, South Africa, works primarily in sculpture and photomontage and is widely known for her sculpture, Butcher Boys (1985-86) in the collection of the South African National Gallery. Alexander’s solo exhibitions include Jane Alexander: On Being Human (2009) at the Galilee Chapel of Durham Cathedral, Survey (2009) at the Jack Shainman Gallery in New York, Jane Alexander (2000) at Gasworks in London, and Bom Boys and Lucky Girls (1999) at the University of Cape Town, Irma Stern Museum. Her artwork has been exhibited widely in international group exhibitions including the Venice, Havana, Gothenburg, Tirana, Bamako, São Paulo, Singapore, and Dakar biennials. She has also participated in such group exhibitions as Africa Remix (2006) exhibited in Europe, Japan, and South Africa; Apartheid: The South African Mirror (2007) in Spain; Personal Affects: Power and Poetics in Contemporary South African Art (2004) in the USA; and The Short Century (2002) in Germany and the USA. She currently teaches at the University of Cape Town’s Michaelis School of Fine Art.

Teen Council is supported by Ms. Louisa Stude Sarofim, Texas Women for the Arts and Texas Commission on the Arts.

Funding for the Museum’s operations through the Fund for the Future is made possible by generous grants from Chinhui Juhn and Eddie Allen, Anonymous, Jo and Jim Furr, Barbara and Michael Gamson, Brenda and William Goldberg, Mr. and Mrs. I.H. Kempner III, Leticia Loya and Fayez Sarofim.

Jane Alexander: Surveys (from the Cape of Good Hope) is organized by the Museum for African Art (MfAA), New York, and supported, in part, by the National Endowment for the Arts. It is guest curated by Pep Subirós.