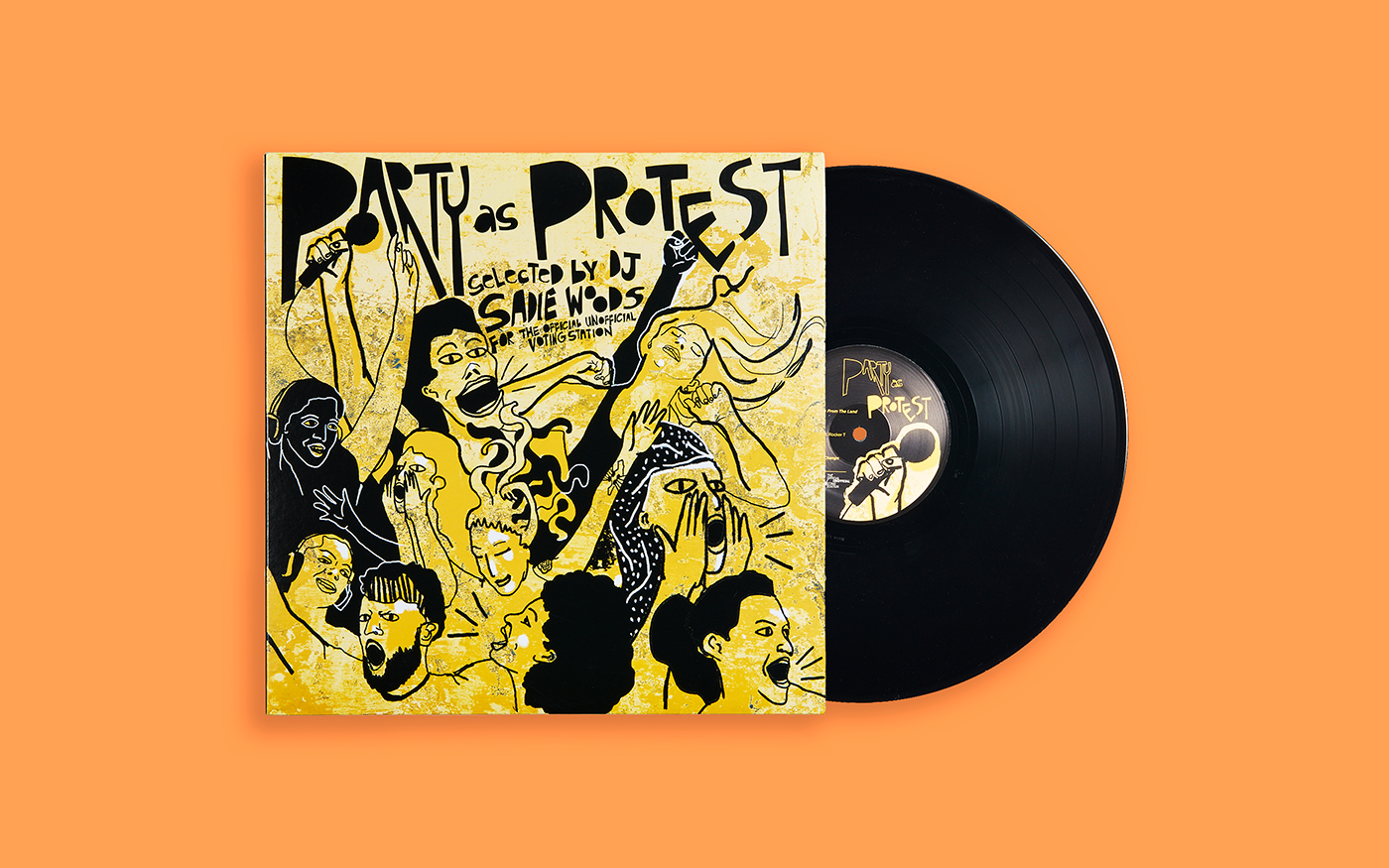 Election Day is finally here! Spend some time with artist Aram Han Sifuentes and hear about her work and research sharing the voices of those not allowed to vote.

Then get to the polls or take a break from the news with DJ Sadie Wood’s Party as Protest playlist. Party As Protest features musical works drawing from themes of the civil rights era and social struggles, centering BIPOC voices and celebrating cultural heritage. This mixtape showcases a variety of artists who have contributed to Chicago’s expansive music scene and continued history of mobilizing traditions through music from soul to hip hop, afrobeat to rock, and experimental electronic music. Also featuring performances by Frewuhn, Damon Locks, and Isa Starr.

Singer-Songwriter, Franchelle Lucas known as “Frewuhn, was born in Houston, Texas, surrounded by a collage of musical inspiration. Sonically, she embodies a peaceful flow and ambient strength. She is heavily influence by 90s rock, R&B, country, and artists like Res, Santigold, and Stevie Nicks. Her love of the sacred wisdom of folk songs, the blues, and gospel is coupled with her first love of music found in church where she gained her initial performance experience.

Frewuhn made her debut in 2008, singing with Alternative soul outfit Neon Colllars, and has performed as a backing vocalist for many artists including CeCe Winans, and Solange. She released her first solo project Stupid Carnival in 2018. Frewuhn is a messanger who encourages listeners to go beyond the simplicity of her narratives to encourage freedom and healing from within.

Damon Locks is a Chicago-based visual artist, educator, vocalist/musician. He attended the Art Institute of Chicago where he received his BFA in fine arts. Since 2014 he has been working with Prisons and Neighborhood Arts Project at Stateville Correctional Center teaching art.  He is a recipient of the Helen Coburn Meier and Tim Meier Achievement Award in the Arts and the 2016 MAKER Grant. He operated as an Artist Mentor in the Chicago Artist Coalition program FIELD/WORK. In 2017 he became a Soros Justice Media Fellow. In 2019, he became a 3Arts Awardee. Currently he works as an artist in residence as a part of the Museum of Contemporary Arts’ SPACE Program, introducing civically engaged art into the curriculum at the high school, Sarah E. Goode STEM Academy. Damon leads a group entitled Black Monument Ensemble and is a founding member of the group The Eternals.

Aram is a 2016 Smithsonian Artist Research Fellow, 2016 3Arts Awardee, and a 2020 Map Fund Grantee. Her project Protest Banner Lending Library was a finalist for the Beazley Design Awards at the Design Museum (London, UK) in 2016. She earned her BA in Art and Latin American Studies from the University of California, Berkeley, and her MFA in Fiber and Material Studies from the School of the Art Institute of Chicago. She is currently an Adjunct Associate Professor at the School of the Art Institute of Chicago, and the 2020-2021 Artist-in-Residence at Loyola University Chicago.

Isa Starr is a singer, songwriter, MC, Musical Director, and founding member of nationally recognized music group POETREE Chicago. She has performed nationally and internationally alongside notable acts, such as Erykah Badu, The Roots, Common, Wu-Tang, Roy Ayers, Amel Larrieux, and Dead Prez among others. Isa Starr’s latest project “Isa’s House,” Produced by MookNETO, is available on all streaming platforms.

Award winning artist Sadie Woods has had an exciting career, showcasing her talents everywhere from academia to nightclubs, boutiques to museums. As a multidisciplinary artist, curator and deejay, Woods’ work focuses primarily on social movements and resistance, and producing collaborations within communities of difference. She also deejays under the moniker Afrodjia, focusing on diasporic Afro-Latin and -Caribbean music and culture. She has exhibited her work and deejayed nationally and internationally. Publications include Harald Szeemann Méthodologie Individuelle published by JRP Ringier with Le Magasin—Centre National d’Art Contemporain de Grenoble, in collaboration with the Department of Curating Contemporary Art, Royal College of Art, London.

Woods received her BA from Columbia College and MFA from The School of the Art Institute. She is a 2020 recipient of the City of Chicago’s  Department of Cultural Affairs and Special Events Esteemed Artist Award and currently Faculty at the School of the Art Institute, Residents Orchestrate Project Manager at the Chicago Sinfonietta, and resident deejay on Vocalo 91.1FM and Lumpen Radio 105.5FM.