More Real Than Reality Itself brings together single-, multi-channel, and installation-based video works by four artists who breathe new life into the medium’s familiar documentary parameters. Andrea Geyer, Camille Henrot, Laure Prouvost, and A. L. Steiner use video as a vehicle to communicate their unique understandings of the world. Their works expose video’s capacity for poetry, its materiality, and its ability to suggest alternative futures by reframing how we see the present. Through affecting emotional responses, their works offer us new ways to understand and inhabit the world we share.

A. L. Steiner’s multi-channel installation More Real Than Reality Itself (2014)—from which this exhibition gratefully borrows its title—is a consideration of political activism that emphasizes its personal dimensions, rather than positing a singular, dominant history. Steiner’s interviews with a sequoia activist and participants in the Black Panthers and the George Jackson Brigade, among others, are interspersed with her own pointed, decidedly queer, and occasionally humorous interjections. By juxtaposing fiction, fact, and fantasy, More Real Than Reality Itself exposes “history” as a topic that is unstable, subjective, and mutable. This work was a critically acclaimed selection in the 2014 Whitney Biennial.

In her single-channel videos It, Heat, Hit (2010) and How To Make Money Religiously (2014), Laure Prouvostrelishes in playing the part of the unreliable narrator; her rapid-fire, short-form works alternately suggest then dissemble any sense of narrative resolution. The stories she shares are like roadmaps that send us into a series of dead ends and cul-de-sacs where we’re encouraged to turn around and get back out on the road. Prouvost intersperses barrages of sound and moving images with graphic textual layouts that briefly suggest we may have obtained a stable point of reference, but we can see her pleasurable smile as she pulls the rug she’s led us onto out from under our feet. Prouvost is the recipient of the 2013 Turner Prize.

Camille Henrot developed her single-channel installation Grosse Fatigue (2013) during a residency in Washington, D. C. as a Smithsonian Artist Research Fellow. Given permission to film the broad and diverse collections of the museums of the Smithsonian Institution, Henrot tasked herself with telling the story of the creation of the universe. In this work, which garnered the artist a Silver Lion award as the most promising young artist at the 2013 Venice Biennial, Henrot represents her strain to synthesize diverse and even discordant religious, philosophical, hermetic, and oral beliefs and traditions with a dense proliferation of ubiquitous desktop computer windows. Layering Internet clips with footage Henrot shot in the Smithsonian, Grosse Fatigue is a haptic exploration of the evolution of culture and systems of knowledge.

Produced during her residency at the Museum of Modern Art in New York, Andrea Geyer’s single-channel video Insistence (2013) and the installation-based multi-channel work Three Chants Modern (2013) both explore the presence of women as the driving forces behind the fundamental establishment of Modernist traditions in the United States. By considering the relationships that linked diverse individuals—including Abby Rockefeller, Lillie P. Bliss, Mary Sullivan (MoMA), Gertrude Vanderbilt Whitney, Hilla Rebay (Guggenheim), Helen Clay Frick, and Katherine S. Dreier (Société Anonyme) in and across salons, speakeasies, dinner tables, beds, and bars—Geyer highlights accomplishments that bridged class separations, diverse cultural backgrounds, and aesthetic affiliations. Geyer’s works insist that the invigorating spirit of art, politics, education, and social reform championed by these women is not a finished history but a vital temperament that continues to motivate culture today.

Funding for the Museum’s operations through the Fund for the Future is made possible by generous grants from Chinhui Juhn and Eddie Allen, Anonymous, Jereann Chaney, Marita and JB Fairbanks, Jo and Jim Furr, Barbara and Michael Gamson, Brenda and William Goldberg, Leticia Loya, Fayez Sarofim, Robin and Andrew Schirrmeister, and David and Marion Young.

More Real Than Reality Itself is organized by Dean Daderko, Curator at the Contemporary Arts Museum Houston. 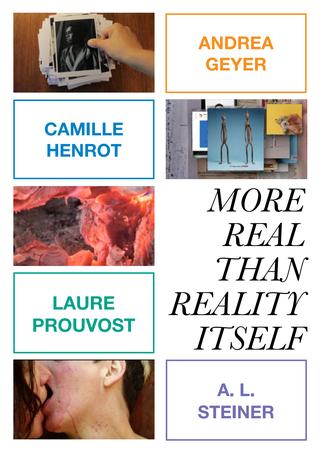