Parallel Practices: Joan Jonas & Gina Pane brings together a selection of works by two artists born a short time apart who are renowned for their foundational contributions to the field of performance art. Jonas and Pane were proto-feminist artists, working in New York and Paris respectively, who worked multidisciplinarily at a time when many of their peers focused their attentions on a single medium. Through selections of their sculpture, photography, video, drawing, installation, and live arts, Parallel Practices celebrates the shared and complementary aspects of Jonas’ and Pane’s art, and highlights the differences that characterize their unique bodies of work. Parallel Practices also marks the first comprehensive exhibition of Gina Pane’s work in the United States.

Joan Jonas’ (b. 1936, New York City) experiments with video are among the earliest and most enduring investigations of this medium. Jonas owned the first Sony Porta Pak video recorder in the United States, which she acquired on a trip to Japan in 1970. Her performances for the camera offer viewers an intimate view of the artist’s creative process. Early video works like Good Night Good Morning (1976) investigate the relationships between physical, temporal, and televisual space; day after day, she repeatedly greets a video camera while monitoring her image on a television and recording it for later viewing. The combination of moving images and sculpture is a hallmark of Jonas’ work. Parallel Practices features Jonas’ most recent video installation, Reading Dante III (2010) in which literary narrative provides an inspiration for a multi-channel video installation that blurs the boundaries between the inside and outside of the filmic frame. In addition, beginning May 4, Jonas’ performance work Mirror Check (1970) will be presented in CAMH’s Brown Foundation Gallery on Saturdays at 2PM.

Gina Pane’s (b. 1939, Biarritz – d. 1990, Paris) early works include a series of physical interventions in pastoral landscapes that are documented in sequences of still images. They anticipate the performance works—or actions as she called them in her native French—that later brought her widespread acclaim. Pane is best known for performances in which self-inflicted wounds were meant to shock her audience out of complacent states. For Action Escalade non-anesthésiée [Action Non-anaesthetized Climb] (1970) Pane installed a ladder-like metal structure whose rungs were covered with sharpened metal points on a wall of her studio. Grids of photographs document Pane climbing on the structure to the point of exhaustion and are shown alongside the object. Pane’s constats d’action[proofs of action] are unique montages of photographic images, occasionally including drawings and notations,with which the artist contextualized her actions. Pane considered the constats d’action as autonomous works and not mere documentation; they extend the life of her performances and communicate their sensibilities. Pane’s final series of works, the Partitions, transform Christian iconography into abstract expressions of otherworldly concerns. Saint Sébastien, Saint Pierre, Saint Laurent – Partition pour trois portraits [St. Sebastian, St. Pierre, St. Lawrence – Partition for Three Portraits] (1986) addresses the martyrdoms of these saints with an alchemical materiality.

The catalogue accompanying the exhibition is made possible by a grant from The Brown Foundation, Inc.

Funding for the Museum’s operations through the Fund for the Future is made possible by generous grants from Chinhui Juhn and Eddie Allen, Anonymous, Jereann Chaney, Sara Dodd-Spickelmier and Keith Spickelmier. Jo and Jim Furr, Barbara and Michael Gamson, Brenda and William Goldberg, Marley Lott, Leticia Loya and Fayez Sarofim. 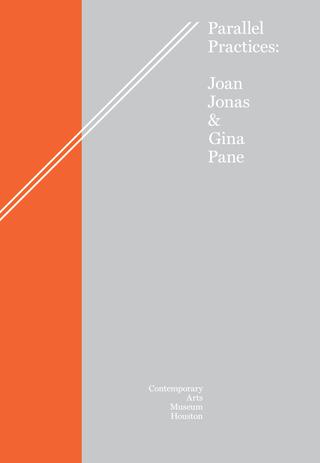