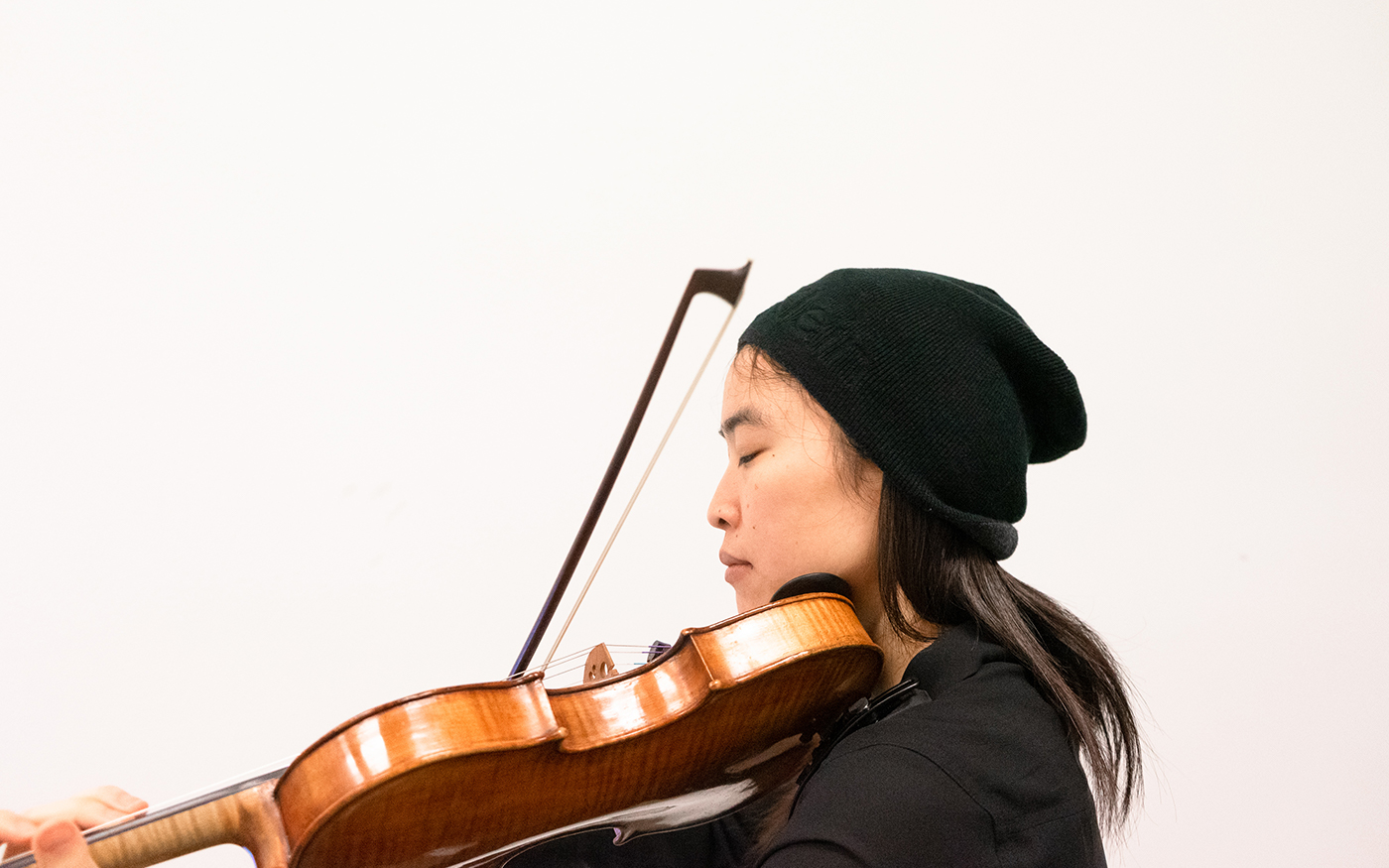 In conjunction with the exhibition Wild Life: Elizabeth Murray & Jessi Reaves, Musiqa proudly presents a special virtual concert inspired by the work of Elizabeth Murray and Jessi Reaves. The program will include new works for string quartets, commissioned by Musiqa. Burning will be premiering and is a work composed by Musiqa’s 2020 Emerging Composer Fellow Nicky Sohn, the second work is Axiom by Houston composer Karl Blench.

Composer Nicky Sohn shares more about her inspiration and the creation of the work Burning:

“Inspiration can hardly be predicted nor deliberate. It could be from opening a packet of hot sauce, watching a flame slowly flicker to an ember, saying a forever farewell, missing someone—these were my sources of inspiration for Burning, for string quartet. Winter of 2020 was a strange time for me—I am sure for many, 2020 was odd, never turning the way you’d think.

All the four events I’ve mentioned above somehow to me gave the sensation of burning. To get through the obvious, eating hot sauce and watching a fire is easily connected to burning—your tongue, desert fire.

Works presented in the exhibition, Wild Life: Elizabeth Murray & Jessi Reaves, also have this spark of energy and color that to me felt like burning. My ideas often tend to be scattered and my inspiration may seem chaotic, but the burst of energy and ideas has resulted in a dynamic and lively work. This piece bends several adjectives that resemble a fire, and the process of burning: luminous, flaring, glowing, sparkling. Burning cites the changing sensation, from rapture to grief, every sound to deep, unending silence.”

From ballet to opera to Korean traditional-orchestra, the wide-ranging talent of composer Nicky Sohn is sought after across the United States, Europe, and Asia. Characterized by her jazz-inspired, rhythmically driven themes, Sohn’s work has been described as “like John Adams’ ‘Short Ride in a Fast Machine’ on steroids” (YourObserver), “dynamic and full of vitality” (The Korea Defense Daily), and having “elegant wonder” (Frankfurter Allgemeine Zeitung). As a result, Sohn has enjoyed commissions from the world’s preeminent performing arts institutions, including sold-out performances at the Stuttgart Ballet in Germany, The National Orchestra of Korea, the New York Choreographic Institute at New York City Ballet, and the Aspen Philharmonic Orchestra.

Sohn’s music has been performed by the Minnesota Orchestra with Osmo Vänskä, Grammy-winning soprano Jessica Rivera at the Gabriela Lena Frank Creative Academy, and Misato Hanawa at Tokyo City Opera. She was recently commissioned by the Orchestra of St. Luke’s to write a new orchestral work scheduled to be premiered in 2021. Her music has been featured at renowned music festivals including the Aspen Music Festival, Perlman Music Program, Les Ecoles d’Art Américaines de Fontainebleau, Ars Nova with Unsuk Chin and the Seoul Philharmonic, and Chelsea Music Festival with Ken-David Masur, among others.

Nicky Sohn is currently pursuing a fully-funded doctoral degree at The Shepherd School of Music of Rice University and holds degrees from The Juilliard School and Mannes College of Music. She is grateful to her pedagogues, which include Robert Beaser, Anthony Brandt, Chris Theofanidis, and Richard Danielpour.

Winner of the 2013 and 2016 Chamber Music America/ASCAP Adventurous Programming Award, Musiqa is a non-profit organization dedicated to the performance of contemporary classical music. Founded in 2002 and led by four composers, Musiqa aims to enrich and inspire the community through programs that integrate contemporary music with other art forms. Musiqa celebrates the creative arts through interdisciplinary concerts that highlight contemporary music and its connections to literature, film, dance, art, and more. With its innovative collaborations and educational programming, Musiqa strives to make their repertoire accessible and vital to audiences of all ages and musical backgrounds.