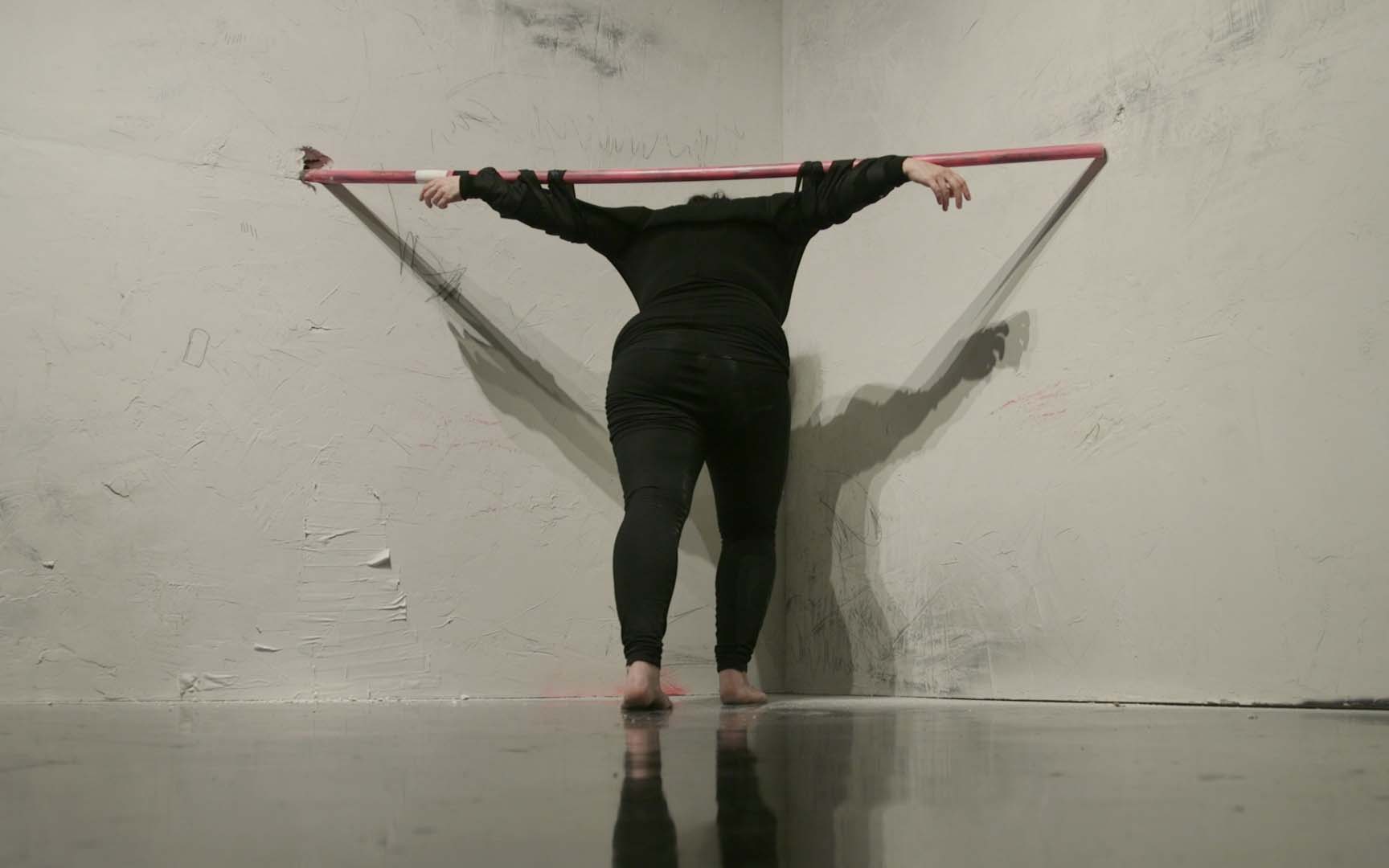 Saintlorraine—the collaborative duo of Britt Lorraine and Kristy Perez—will present their performance and drawing installation VERTEX in Right Here, Right Now: San Antonio during the opening reception. As a performer repeatedly tries to force herself into the corner of two walls covered with abstract drawings, the performance becomes an extension of the drawing process and pushes the limits of the drawings. The verticality of bodies is pitted against the horizontality of landscape. The performer faces a corner in the gallery and begins to draw from her inner vocabulary to perform a series of movements, if the performer moves toward the corner the dowel across her shoulders comes in contact with the walls making a sound and a mark on the walls. The performer reacts, improvising based on her inability to move freely and beyond the vertex. This experimental work explores the continual crossroads that individuals come to in life and how such moments may force us to proceed one way or another.

Saintlorraine is the collaboration of artists and life partners Britt Lorraine and Kristy Perez. The two met in 2009 and decided to merge their ideas and begin working together. Their first work we are a handful premiered in 2010 at San Antonio’s McNay Museum. Since then, the couple has created five other performance installations, including the premiere of their work giving to get at the 2013 San Antonio CAM Perennial bite like a kitty, curated by Bill Arning. They are invested in pushing a cross-disciplinary approach in the “making” of their work and in this respect the work maintains a highly experimental tone, resulting in its own unique aesthetic. The artists continue to rigorously pursue both their collaborative and solo projects.

Britt Lorraine (b. 1978) earned her B.F.A at Southern Methodist University (Dallas) and her M.F.A. at the University of Iowa (Iowa City), and has studied at the Martha Graham School of Dance (New York City). She is a 2012 Artist Foundation of San Antonio grant recipient for her reconstruction of the Ballet Russes’s Rite of Spring. RITE, an eight-plus-hour nonstop solo dance performance, won the 2012 Best of Contemporary Art Month award in San Antonio. In May of 2018, she will premiere her solo work PANOPTICON at San Antonio’s Sala Diaz Gallery.

Kristy Perez (b. 1971) is a multidisciplinary artist whose work ranges from drawing, poetry, abstract painting, and design to site-specific sculptural installations. She worked for six years in the field of art conservation prior to pursuing her visual-arts practice full time in 2007. She received a nomination for the 2011 Arthouse Texas Prize and is a two-time recipient of the Artist Foundation of San Antonio grant, including the 2010 Chuck Ramirez Award for Visual Art. Her work has garnered solo exhibitions, including All That Stands Between Us (2009), curated by Hills Snyder at Sala Diaz Gallery, and group shows including Urban Jalousie, the inaugural roaming biennial of Tehran in Istanbul, Turkey, curated by Amirali Ghasemi; and Bruit Rose, curated by Marie Frampier at Maison Populaire, a contemporary art center in Paris. Perez recently completed her first limited-edition printed book of original poems and drawings titled twenty from the margins as part of her latest solo exhibition, The Giving Distance at the Southwest School of Art in San Antonio.