The Contemporary Arts Museum Houston will present Perspectives 139: Abraham Cruzvillegas, opening October 24, 2003, the first solo museum show for the Mexican artist, which examines his three-dimensional, assemblagebased work. The exhibition will feature a number of new and recent works, including ten new wall- and floor-bound sculptures developed by Cruzvillegas specifically for this exhibition. Organized by the Contemporary Arts Museum Houston, Perspectives 139: Abraham Cruzvillegas will remain on view at through January 4, 2004.

The exhibition reflects the institution’s commitment to documenting new directions in art. “Our mission at the Contemporary Arts Museum Houston is perfectly embodied in the exhibition for Cruzvillegas,” remarked Marti Mayo, Museum Director. “Creating curious and playful compositions of various found objects, the show offers an in-depth look at the work of this international artist. It continues a tradition at the Museum of providing dynamic experiences for our audiences, and insight into the contemporary world of art and ideas.”

Cruzvillegas currently lives and works in Mexico City, where he is an active and influential member of a new generation of contemporary artists. Known for his composite, three-dimensional work, Cruzvillegas draws upon diverse materials and ready-made elements to create peculiar assemblage-based pieces. His ingenious arrangements of discrete, seemingly unrelated objects include items such as a variety of bird feathers, photography studio props, seashells, and bowling balls. Assembled in uncomplicated ways, these materials are used to create unusual and thought-provoking work.

New and recent works in the exhibition include: La Curva (2003), made of bundles of dozens of black and red tallow candles hanging by their wicks from the inside of a cymbal; La Monumental (2003), which is made up of one collapsible line of unprocessed resinous pinewood sticks fastened together with screws and folded to form a light irregular volume about three feet wide and three feet high; and an expanded installation of Las Guerras Floridas(2003), comprised of several rows of more than forty shaped maguey leaves, installed on a 40-foot long wall. The leaves will dry out and slowly parch over the course of the exhibition, continuously changing the work. These sculptures — whose titles are taken from names of popular cantinas in Mexico City — will be shown along with a number of recent works borrowed from private collections in the United States and Mexico.

“With rather simple though often unusual objects, Cruzvillegas creates art that is at once straightforward and intensely complex,” remarked Paola Morsiani, Curator at the Contemporary Arts Museum Houston. “His work engages viewers, urging them to make sense of the dazzling compositions before them. The notions of instability and energy that pervade Cruzvillegas’ art contribute to a truly compelling viewing experience.” Abraham Cruzvillegas was born in 1968 in Mexico City. He graduated in 1990 from the Facultad de Filosofía y Letras, U.N.A.M., Mexico City, and studied art at the studio of Gabriel Orozco. He has had recent solo exhibitions at Tilton/Kunstera Gallery, New York (2003), Museo Universitario de Ciencia y Arte, Mexico City (2001), and La Esmeralda, Mexico City (2001). His work has been included in group exhibitions such as The 50th Venice Biennale (2003), The Squared Circle: Boxing in Contemporary Art, Walker Art Center, Minneapolis (2003), Site Dilemas: Dialogos en el ArteMexicano, Museuo de Arte Moderno, Mexico City (2002), and XXV Bienal de São Paulo, Brazil (2002).

Abraham Cruzvillegas is organized by Curator Paola Morsiani, and is the 139th exhibition in the Contemporary Arts Museum Houston’s Perspectives series, a dynamic exhibition program presenting some of the world’s most interesting contemporary art. and. A Perspectives-format catalogue accompanies the exhibition and contains an essay by Morsiani, reproductions of exhibited work, and documentation on the artist’s career.

Perspectives catalogue is made possible by a grant from The Brown Foundation, Inc. 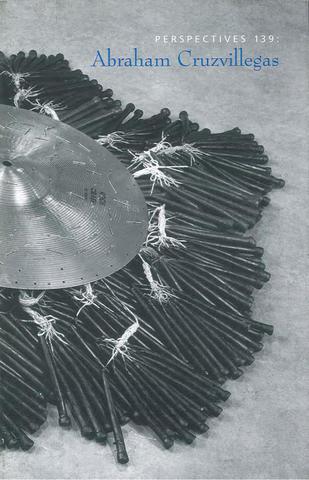