The four new works, all large-scale diptychs, draw from the artist’s childhood in Singapore and its disjointed assimilation of American culture. Drawing upon her childhood memories, Wong combines them with the psychological drama of adolescence to create a series of hyperstylized yet realistic narratives that reveal the universal struggles of growing up female. The diptychs and two additional single paintings that comprise the exhibition are produced through a laborious process of meticulously rendering each figure in colored pencil on a monochromatic, flat-plane background.

Wong’s paintings and works on paper are formally related to 1960s and 1970s Color Field painting; but in contrast to those abstract works, Wong’s paintings contain images and likenesses of the artist in a variety of seductive and humorous costumes and settings. Wong’s work underscores the shifting psychological experience of an Asian female who grew up in a homogenous society and then, after moving to the U.S., became subject to presumptions and objectifications that stemmed from her gender and ethnicity. In her work, Wong seamlessly weaves together a multitude of stereotypical and reality-based personas that reflect these experiences.

Organized by Contemporary Arts Museum Houston Associate Curator Valerie Cassel Oliver, the exhibition will be accompanied by a Perspectives-format catalogue with an essay by Cassel Oliver, reproductions of exhibited work, and documentation on the artist. 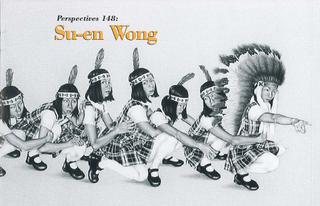