CAMH’s Teen Council organizes a Perspectives exhibition every two years that features work by Houston-area teens.  Perspectives 174: Re:  Generation explores issues of communication, technology, culture, identity, and the experience of coming of age in the 21st century.  Artists are encouraged to freely interpret the exhibition’s title and themes through their work in any media, including but not limited to:  painting, drawing, sculpture, photography, video, and installations.  Work selected for the show by guest juror Robert A. Pruitt was displayed in the Museum’s Zilkha Gallery and is included in a printed exhibition catalogue.

Funding for the Museum’s operations through the Fund for the Future is made possible by generous grants from Chinhui Juhn and Eddie Allen, Anonymous, Elizabeth Howard Crowell, Barbara and Michael Gamson, Brenda and William Goldberg, Mr. and Mrs. I.H. Kempner III, Leticia Loya and Fayez Sarofim.

The Museum’s operations and programs are made possible through the generosity of the Museum’s trustees, patrons, members and donors. CAMH receives partial operating support from the Houston Endowment, the City of Houston through the Houston Museum District Association, the National Endowment for the Arts, the Texas Commission on the Arts, and The Wortham Foundation, Inc.

Perspectives 174: Re: Generation is organized by CAMH’s Teen Council. 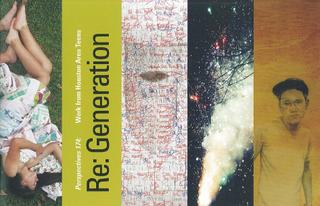