In 1913, when Igor Stravinsky’s legendary ballet and orchestral work The Rite of Spring premiered at the Théâtre des Champs-Élysées, its audience found it so avant-garde and unfamiliar that they nearly rioted. What they saw positioned familiar elements and tropes in an entirely new, and perhaps disconcerting, context. So close and yet so far.

The bewildering sensation of recognizing the foreign in the familiar and the familiar in the foreign is at the heart of the exhibition Rites of Spring. Taking stock of the tension between abstraction and representation, Rites of Springjuxtaposes abstract paintings that make room for bodies with photographs that could be described as ‘painterly.’ To paraphrase Kurt Vonnegut, the easiest way to bring a scene into focus is to put a figure in it. Anchoring abstract painting with figurative elements, and using the straightforwardly representational medium of photography to create abstract images, Rites of Spring makes the case that abstraction isn’t solely the territory of painting.

About Outside the Lines

Rites of Spring is one in a six-part series of exhibitions organized under Outside the Lines. Presented on the occasion of the Contemporary Arts Museum Houston’s 65th anniversary, Outside the Lines is conceived as an evolving dialogue on contemporary abstraction. The first three exhibitions—UIA (Unlikely Iterations of the Abstract), Outside the Lines, and Black in the Abstract, Part 1: Epistrophy—opened October 31, 2013. The final three presentations—Rites of Spring, Painting: A Love Story, and Black in the Abstract, Part 2: Hard Edges/Soft Curves—open in January over three weekends.

From recent paintings embracing more traditional definitions of abstraction to multimedia works that challenge such notions, Outside the Lines showcases the Museum’s commitment to chronicling shifts in contemporary art practices by presenting some of the most compelling work being made today and revisiting the historical foundations to which they speak. CAMH’s director Bill Arning and full curatorial staff—Valerie Cassel Oliver and Dean Daderko—each organized two exhibitions; these six complete visions are mounted in two rounds. Outside the Lines is installed in both the Brown Foundation and the Zilkha galleries, uniting the whole museum in one thematic exhibition for the first time. Constructed as a dynamic, diverse, and innovative curatorial project, Outside the Lines offers a variety of vibrant visual experiences and perspectives on abstraction in the present moment.

Hearkening back to the popular CAMH exhibition Abstract Painting, Once Removed (organized by Dana Friis-Hansen, 1998) and the curatorial experimentation in Changing Perspectives (1995), Outside the Lines opened October 31 with three presentations: UIA (Unlikely Iterations of the Abstract) organized by Arning, Black in the Abstract, Part 1: Epistrophy organized by Cassel Oliver, and Outside the Lines organized by Daderko. Staggered openings in January 2014 for the remaining three exhibitions in the series—Rites of Spring by Daderko, Painting: A Love Story by Arning, and Black in the Abstract, Part 2: Hard Edges/Soft Curves by Cassel Oliver—invite audiences to re-visit the evolving exhibition and consider abstract painting from multiple vantage points. Though installed in dedicated spaces, these exhibitions converse with each other. The full complement of shows will be contextualized within a single catalogue to be published in 2014.

Teen Council is supported by Ms. Louisa Stude Sarofim, Texas Women for the Arts, and Texas Commission on the Arts.

This exhibition has been made possible in part through the generous support of the Texas Commission on the Artsand the National Endowment for the Arts.

Rites of Spring (Outside the Lines series) is organized by Dean Daderko, Curator at the Contemporary Arts Museum Houston. 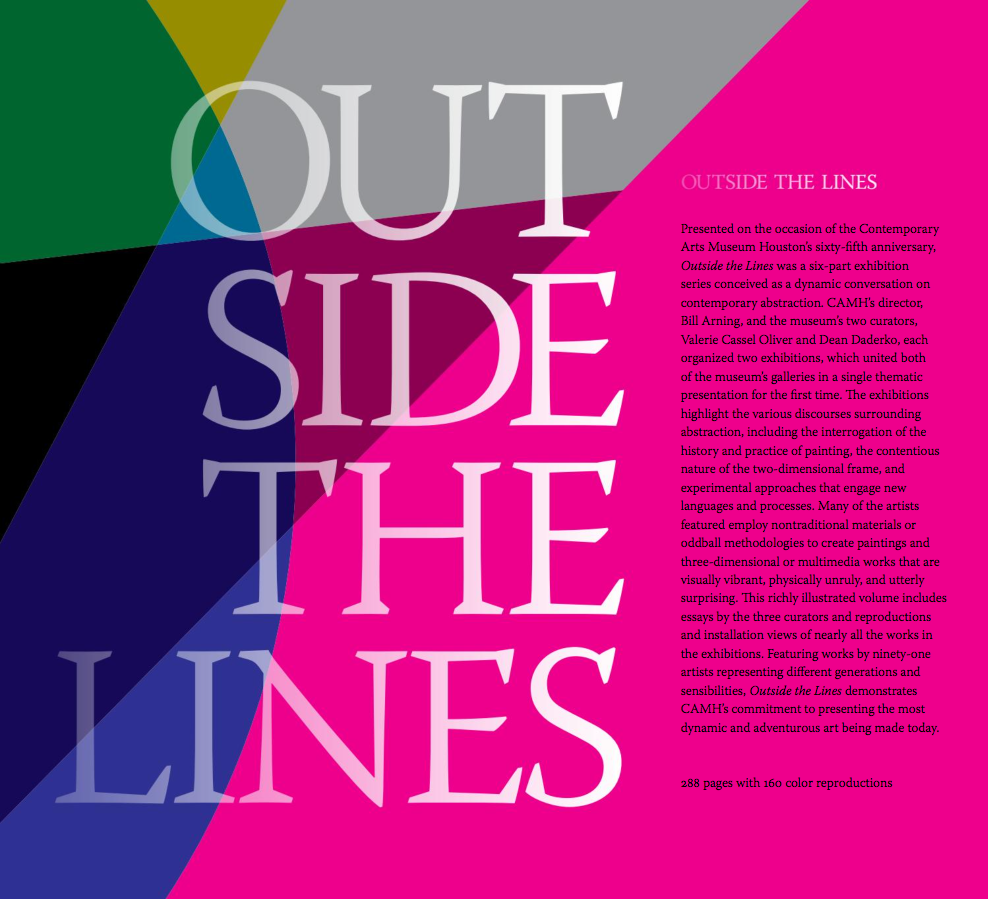