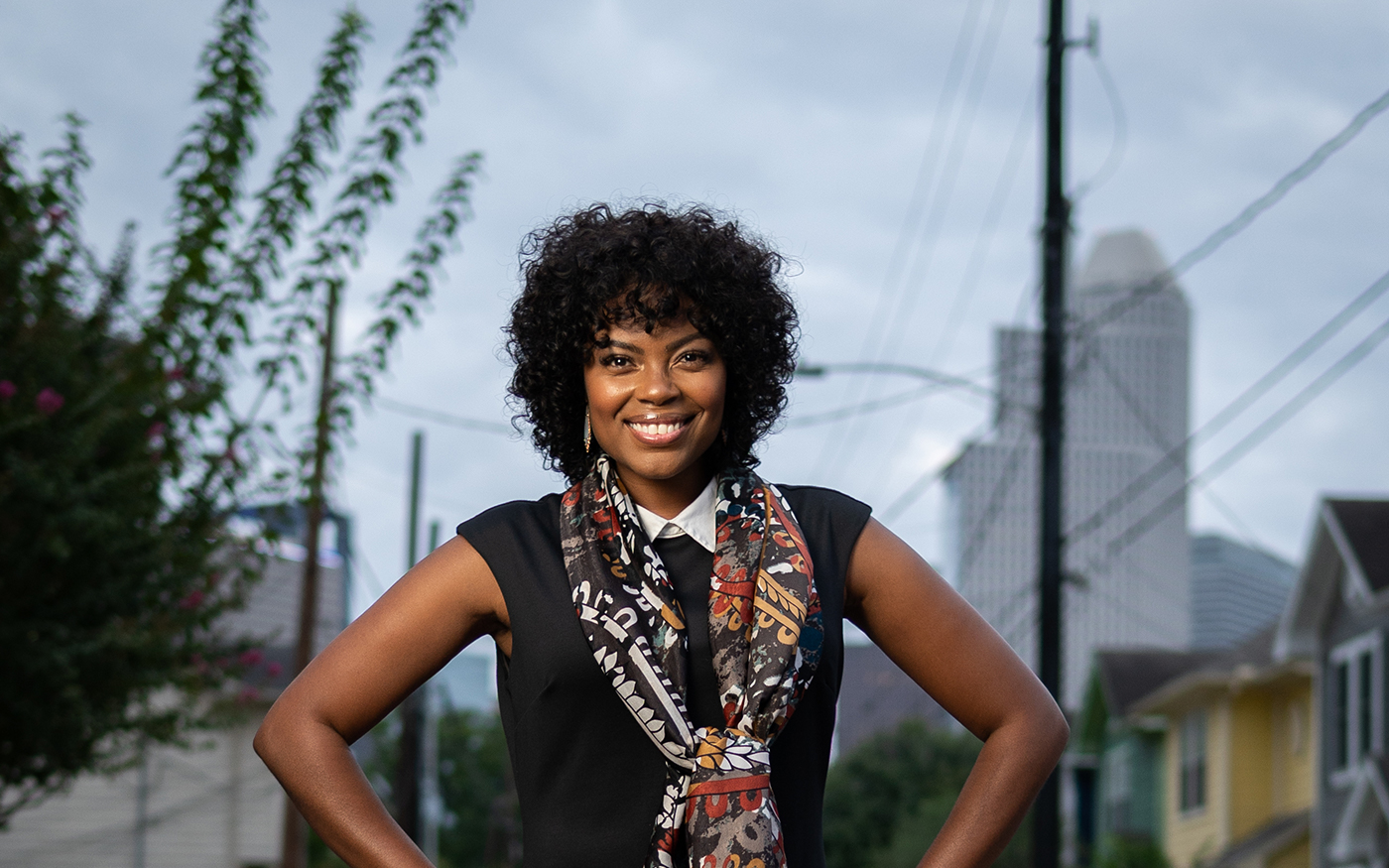 The Houston Freedmen’s Town Conservancy (HFTC) is charged with “Telling the Story of Freedom” in order to preserve the historic legacy of Freedmen’s Town, inspiring all through education and awareness of its unique story. The arts and civic engagement were foundational to the power and wealth of Freedmen’s Town and Houston’s Fourth Ward historically.

Until the mid-1930’s, the Fourth Ward and Freedmen’s Town housed one-third of the African American population and 95% of all Black-owned businesses in Houston. Everything from the Negro Chamber of Commerce, NAACP, The Carnegie Colored Library, Rainbow Theater, and dozens of night clubs and beauty shops contributed to the Fourth Ward’s reputation as the “Harlem of the South.”

For 14 years prior to her journey with the HFTC, Escobar dedicated herself to transforming ideas into action as a civil engineer and green infrastructure advocate, providing highly specialized technical and project support to a diverse range of public agencies, private clients, international NGOs, and design firms from Texas to Silicon Valley, and Shanghai. Her contributions to her profession and community have been recognized with her being named Engineering New Record Magazines’ “Top 20 Under 40 in Texas and Louisiana” as well as the American Society of Civil Engineers “Young Engineer of the Year”. This year she is incredibly proud to have been recognized by Girls Inc. of Greater Houston as the recipient of the Eileen Campbell Vanguard Award for being Strong, Smart, and Bold!

Whether seeking to protect communities from flooding and climate change as an engineer or preserving the history of Freedmen’s Town and its many UNESCO designated structures as an executive director, the goal remains the same. Seek out sustainable and collaborative solutions. She is guided by the principle that “Every project has the opportunity to enrich the lives of citizens through the practice of thoughtful and collaborative design. By bridging the gap between communities, stakeholders, engineers, architects, policymakers, developers, owners, and contractors, I aim to transform ideas into meaningful action.” Escobar is taking meaningful action and currently facilitating several innovative projects for the benefit of Freedmen’s Town including developing an augmented reality tourism app,  Freedmen’s Town Visitors Center, the Freedmen’s Town Heritage District, the Emancipation National Historic Trail Study, and the Rice University funded Freedmen’s Town Atlas Project (1865-2020).

Hesse McGraw is Executive Director of Contemporary Arts Museum Houston (CAMH), one of the oldest non-collecting contemporary Museums in the United States. Hesse is a curator, writer, and cultural leader who most recently served as Partner of the cross-disciplinary practice el dorado inc, and as Vice President for Exhibitions and Public Programs at San Francisco Art Institute. His curatorial practice and arts organization leadership are internationally acclaimed for shifting organizations into springboards that expand the agency of artists beyond the gallery, reach new audiences, and embrace unexpected contexts.

His noted long-term projects include commissioning Jill Magid’s work The Proposal (2014 – ongoing), which offers the gift of architect Luis Barragán’s body in the form of a two-carat diamond engagement ring in exchange for the return of his body of work to Mexico; Michael Jones McKean’s public artwork The Rainbow (2012 – ongoing), which generates actual prismatic rainbows from recycled water at civic scale; and Theaster Gates’ Carver Bank (2012 – 2016) in Nebraska, which convened a space of urban ecstasy that supported artists living and working in North Omaha. Through these collaborations, more than 75 curated exhibitions, and extensive public and educational programs, Hesse seeks to powerfully share the instrumental role of artists in igniting public imagination and animating our largest problems.

Currently, Hesse and CAMH are engaged in multiple cross-disciplinary projects and public realm design initiatives that position artists as catalysts for cultural and public realm transformation by directly engaging issues such as water recycling, health and wellness, social justice, and equity.