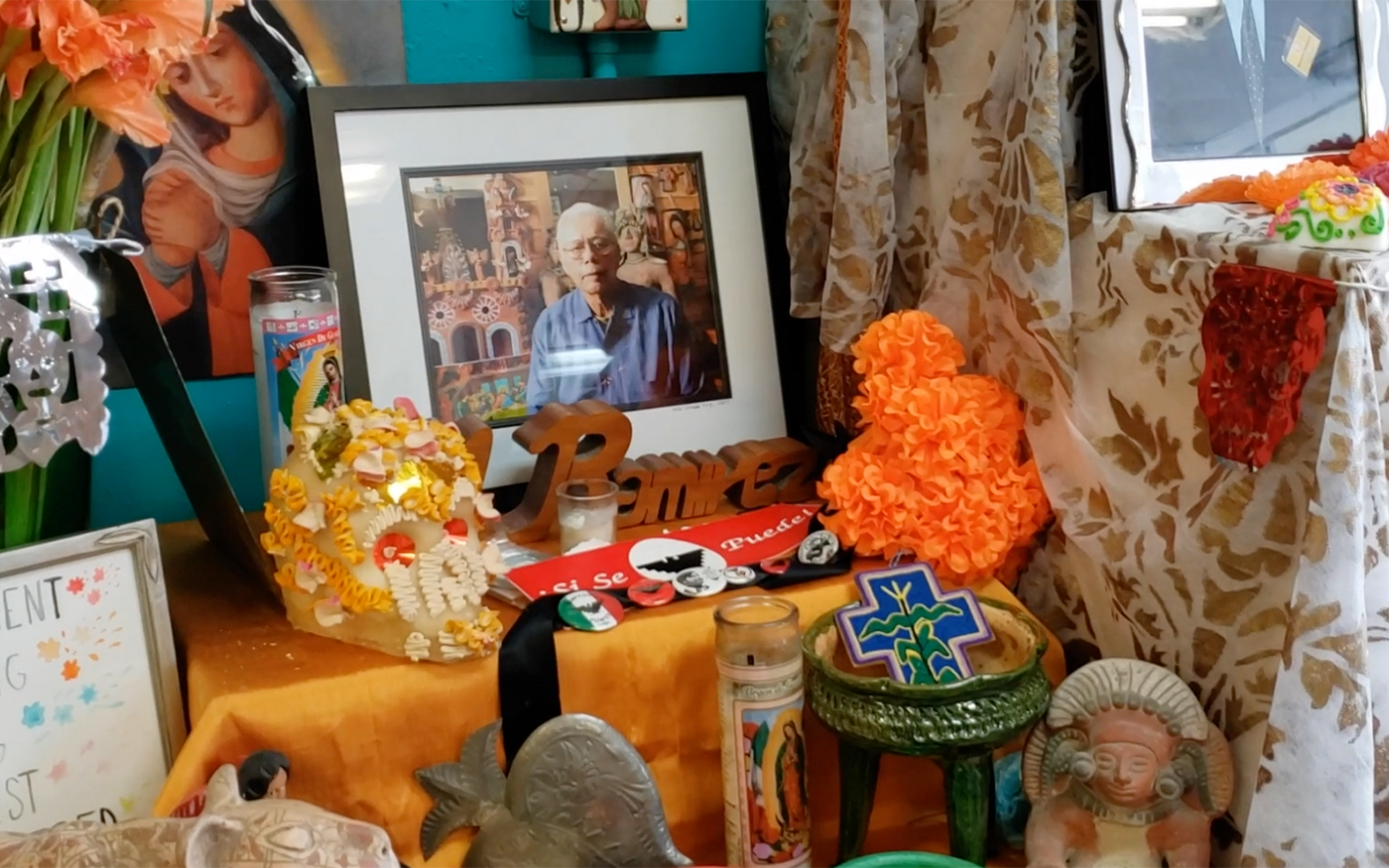 Check out a series of videos by our friends and community partners including Marc Newsome aka Marc Furi who is sharing his Extraordinary Elders film project. The Houston Jazz Collective is sharing a new video featuring the legendary Frank Lacy on a masterclass about jazz. We end the day with our friends at Casa Ramirez to learn more about Día de los Muertos traditions with Chrissie Dickerson Ramirez.

About Marc Newsome aka Marc Furi

Marc Newsome is a multidisciplinary concept artist based in Houston, Texas. His primary mediums are storytelling, photography, documentary filmmaking, graphic design, social practice, and soundscape. His recent focus of inspiration comes from the stories of his own neighborhood of Third Ward – an area of Houston currently undergoing the rapid socioeconomic changes of gentrification.

Newsome, who also goes by his artist moniker, Marc Furi, recently designed a 10’ x 10’ game board art piece satirically depicting a gentrified Third Ward as a game of Monopoly displayed at the exterior of the Station Museum of Contemporary Arts. Summer 2020 he partnered with the Lululemon organization and designed an anti-racism public art campaign called De-Racism as a series of wheat paste posters posted as street art in various Houston locations. He was an exhibitionist in the FotoFest 2020 Biennial – African Cosmologies: Photography, Time, and the Other for his documentary photography of Third Ward printed on metal. His participation in the Mini Murals project was a collaborative project with legendary muralist Israel McCloud. Together they designed and McCloud implemented the transforming of two public lightboxes which included odes to historic Third Ward musicians, Lightnin’ Hopkins, and Arnett Cobb. His previous I Love 3rd Ward solo photography, video, and soundscape show at Art League Houston took place 2018-219. Prior to that (2017) he participated in the 47th Round of artists at Project Row Houses for his I (heart) 3rd Ward project.

His numerous grant awards for documentary projects including his I LOVE 3RD WARD Series where interviewees are asked what they love about the Third Ward area (2018), EXTRAORDINARY ELDERS, a short form docu-series where elders are interviewed by children (2019 – present), EXCELLENCE: The Story of Dr. Thomas F. Freeman and the TSU Debate Team (2020).

Frank Lacy is the consummate “Jazz Artist”—a perennial poll-winner in several disciplines, a multi-instrumentalist, and an award-winning vocalist. He played with Illinois Jacquet’s big band in the early 80’s and a few years later became the musical director for Art Blakey. Lacy has had a long, beautiful career. Some highlights include having worked with big bands led by David Murray, McCoy Tyner as well as Lester Bowie’s Brass Fantasy, and spending twenty years as a member of the Mingus Big Band.

Houston native, TSU alumni, and four time Grammy winner Frank Lacy is a consummate jazz artist, perennial poll winner in several disciplines, a multi-instrumentalist, and award-winning vocalist. While he plays several instruments, he is best known as a master trombonist and his ability to straddle the lines between free-jazz and mainstream.

The Houston Jazz Collective is the brainchild of Shelley Carol and Andre Hayward. Its mission is to enrich and expand the community through performance, education, and advocacy. The Collective takes on many forms but strives to always feature a luminary artist in the jazz world.

Casa Ramirez stands as a cultural pillar in the community offering a selection of folk art, Mexican dresses, local artist work, books on culture and cooking and bilingual books for children, greeting cards and decorations. Nationally known and recognized, the folks at Casa Ramirez celebrate and teach cultural traditions.

Casa Ramirez FolkArt Gallery is owned and operated by Macario Ramirez and wife Chrissie Dickerson Ramirez. Casa Ramirez promotes and celebrates the rich and vibrant Latino culture, especially that of Mexico, Texas, and the Southwest, through related exhibits and shows on Latinx cultural traditions and the sale of its art, folk art and crafts. Not a gallery in the usual sense, the shop more resembles a Mexican market. Work by local and state artists, Joe Lopez, Daniel Lechon, Laura Lopez Cano, Ron Arena, Lizbeth Ortiz, Alberto Godoy, Gonzalo Plascencia, and others are displayed along with popular folk art and crafts from Mexico, books and a variety of items. A classroom is also part of the Casa Ramirez mix. Classes have been offered on DÍa de los Muertos traditions and altar building, learning Spanish and the history of tequila as well as poetry, book readings, and storytelling. Artists have taught gourd painting and mosaic tile techniques.

The Extraordinary Elders Film Project is an interview series where children interview profound elders of the community. Children were taught to conduct interviews and were then paired with community elders for interview sessions. Produced by Busi Peters-Maughan and filmmaker Marc Furi, the series exhibits the importance of recording the wisdom of these elders so their stories can be passed on to future generations.

Join us for a masterclass with the legendary Frank Lacy as he explains what jazz is, talks about the origin of jazz, the elements of jazz, melody, harmony, rhythm, and the ‘blue note.’