Leonardo Garcia has been selected as the recipient of the twentieth annual Marian and Speros Martel Award of Contemporary Arts Museum Houston (CAMH). The Martel Award is given annually to a graduating senior chosen by CAMH in consultation with the visual arts faculty at the senior’s high school. The selection criteria include: production of a significant and meritorious body of work during the senior year, plans to attend an accredited college, university, or art school, and exceptional promise in the visual arts and attendant professions.

Garcia’s work is an experimentation of materials and techniques fueled by his raw anger, energy, and need for constant stimulation. He is working to make sense of all the negative emotions that come out of his head in extreme ways while also having fun. His work reflects the abuse his mind and body have experienced throughout his short life. Garcia works in a variety of media including painting, performance, and video. The pieces he creates are very energetic and in his words “often mistreated and all sorts of messed up.” A very important part of his work is process. As he creates these pieces he pours out his emotions violently and quickly—often screaming defiantly, punching, slamming, kicking, and biting to the point of utter exhaustion. After this violent burst of emotion Garcia goes back to the work and slows down, he reflects the ideas he wants to convey and adds to it in a deliberate manner. His work is very necessary to his life as it gives him an outlet to channel all his negative thoughts and hyper energy. If he were not able to experiment through his art, this energy might seep out of him and explode into the world in a more negative way.

Leonardo Daniel Garcia is a young artist from Houston, Texas. He was raised in the East End of Houston by his parents who are both immigrants from Mexico. He attended a predominately Hispanic Middle School, Edison Middle School where he then auditioned for the Kinder High School for Performing and Visual Arts (KHSPVA) Visual Art department. In the summer of 2019, he attended the Minneapolis College of Art and Design Pre-college summer program in Minneapolis, Minnesota. It has been his privilege to be involved in all the volunteer activities that the Visual Art department has offered. Once he graduates from high school, he plans to continue his practice of art in any way possible. 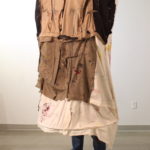 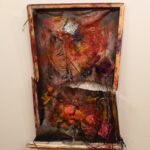 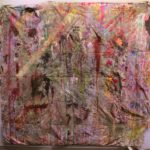 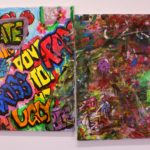 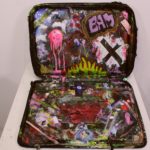